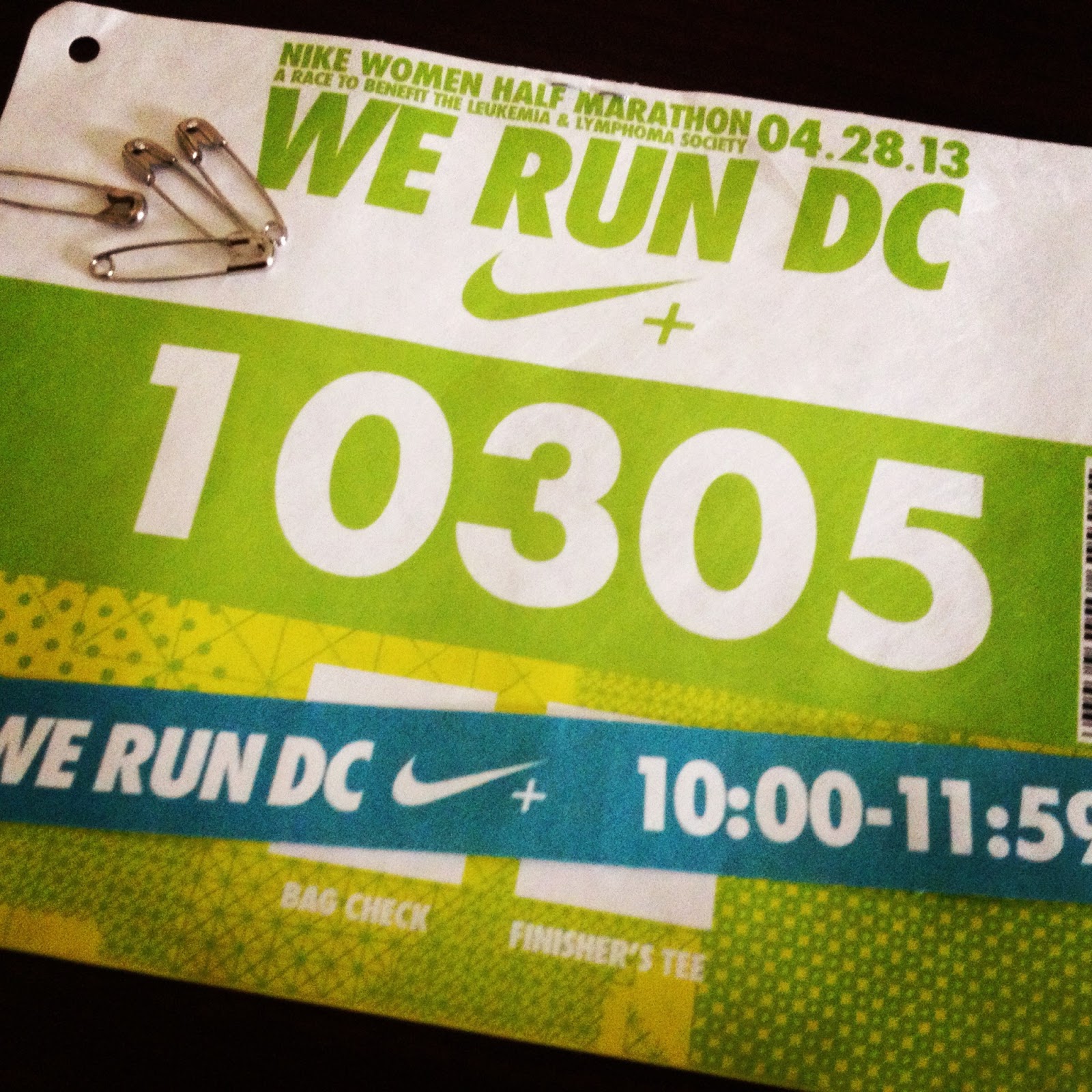 Today I went for my first run since I completed the Nike Women's Half Marathon a week and a half ago in Washington, DC. It's been a frustrating 9 days as I waited and waited and waited until my poor feet were back in a shape that would allow me to run again without pain. The main culprit was an infected toe, although  I also had a fair share of blisters and even my first lost toenail.Yes, I certainly earned my 7 minute PR on that race. My finish did not come without some physical sacrifice.

I may have only covered just over two miles in the early evening humidity today, but it felt like an awfully big deal. I was getting my groove back and jumping back into a training mode and it felt good. I used my playlist from the NWM half and each song I ran with brought me back to a wonderful weekend shared with family and friends.


I was blessed to make the trip to DC with my son and my aunt and to meet up with my two Best Running Friends (BRFs) Malinda and Melissa. Malinda had convinced Melissa and I to sign up with her for the race back in December when it was announced. At that time I had just started training for my first half marathon. I'm so glad we registered for the lottery and gained entry because we had such a special weekend together.

Malinda, Melissa and I kicked off our racing fever together at the Nike Georgetown store bright and early Saturday morning for a Q&A with Shalane Flanagan and Joan Benoit Samuelson. The Q&A was followed by a short shakeout run with these two running greats. Since Malinda, Melissa and I don't live nearby each other, the three of us don't get to run together often so being able to run side by side with Shalane and Joan leading the pack was pretty much as cool as it gets. Afterwards, we were lucky enough to get photos with the ladies and I'll never forget that Joan told me she loved my "I Run Things" shirt.

Sipping on our post-run Jamba Juice smoothies (a very nice touch) Melissa and I made our way towards packet pick up. Within minutes I had my race packet and Melissa had an easy time replacing hers which was accidentally left in a cab the night before. More kudos for the Nike race operation.

When I got back to the hotel my son was still in his PJs munching on his breakfast, meaning we had plenty of time to get to the zoo and enjoy a beautiful day in DC. The National Zoo brought back lots of memories for me and more than once the tears pooled up in my eyes. Joe and I had brought Domani there just before he turned 1 on a trip we made to DC for a Mets v. Nats game. We went to many of the same places and even took photos in some of the same spots. The little guy had a blast and especially enjoyed telling the lions to wake up, trying to eat the dirt like the orangutan, and naming all the parts of the elephant. I'm so glad we had time to do some sightseeing while we were in town for the race.

Saturday night found us out to a delicious Italian dinner with a good friend and her family. It was just the right amount of carb loading, great conversation, and crazy toddler antics to make for a wonderful evening. When it was all over, we even had our own little brush with unidentified fame as my friend's little charmer caught the attention of a couple leaving the White House Correspondents Dinner. It was the perfect lead in to my race, if only I had been able to fall asleep. I always have a problem sleeping the night before a race. Mostly, it's because I'm worried I will oversleep and miss the start.

This time I was awake and ready to go with no problem. There is always something special about pulling on my Team Sparkle skirt for a race and for this 13.1 I was decked out in my Another Mother Runner BAMR tank which adds a whole new layer of kick ass to my running gear. I gathered up my things, kissed my sleeping little guy goodbye and headed to the Metro. Call it fate, but as soon as I stepped out at the Federal Triangle stop, there was Malinda! I gave her a big hug and we spent some time exploring the starting area together - dropping off her bag, making a visit to the porta potties, taking some photos, and eventually making our way to the corrals. My favorite moment was when we were walking back to the corrals from the porta potties and I panicked thinking I had lost my Gu Chomps. My tweet recounting the moment: @MamaDeak: OH NO! Where are my Gu Chomps? Oh, they are in my boob." That just happened. @GUEnergyLabs #WeRunDC

Malinda, Melissa, and I were each in different start corrals (in that order) but Melissa and I were planning on pacing together for at least the beginning of the race so she came back and joined me in the 10 minute corral. It was crowded but somehow we managed to find each other and even more amazing we managed to stay together for the first few miles of the race. It was crowded and didn't really start to space out until about mile 4. In fact, I missed the mat marking the first 5k because I was running up on the curb to pass around a crowd of runners. Rookie mistake, right?

At the 10k mat, I made sure to cross over it with gusto and knew from my Nike+ app that I was putting in a good pace. While my app was a little off on the miles, I knew that I was at least on pace to go sub 2 as I had dreamed, but I had no real idea how close I was to the goal. As it turns out I crossed the 10k mat at 56:56.

I felt really great running this race - that is until I hit miles 7-9. They were by far the hardest part of the course for me. The views were beautiful, but the heat was starting to set in and there was much less crowd support on that part of the course than there was anywhere else. My strongest shot of adrenaline came from the awesome sign "If Sarah Palin can run, so can you."  I literally said out loud "Touche!" and then picked up my pace. It's amazing what a little sign can do for you, but it was still a tough slog through those miles. I made quick work of my Gu Chomps and hydrated religiously - all of which I think helped push me through to the end.

Once I came up on that 15k mark and could visualize running what was basically a 5k I felt another jolt of adrenaline. The crowd support was back - complete with a line of young people waiting to give high fives and all I wanted to do was cross that finish line and hug my little guy. There was one tunnel where the noise of the drums really made things uncomfortable for me, but otherwise the last 3 miles were just willing my body to not lose pace. I knew that if I just kept moving I would at least beat my time from Miami and given how much my feet were hurting and how hot my body was getting I would count that as a victory. Once the finish line was in sight it felt like it kept getting further and further away, but eventually there I was face to face with that blue Tiffany box trying to keep myself standing upright. It was wonderful. I knew I had beaten my time by a significant amount.

In the end, my official finish was 2:04:49, almost 7 minutes better than my 2:11:39 finish in Miami Beach less than 2 months earlier. I was tired and sweaty and I knew that I would have to nurse my feet back to health, but it was so worth it. After I got back to my hotel room, I tweeted: @MamaDeak: I've got blisters, bloody toes, a new PR, and a little blue box. I say I came out on top. #WeRunDC @runnikewomen

This was a truly special weekend. Family. Good friends. Running. A personal record. All in a very special city. It doesn't get much better than that. Except that somehow it did...because the postscript to my weekend is that my favorite running website www.anothermotherrunner.com asked me some questions and did a really lovely feature this past Thursday mentioning the NWM and my plans to run the NYC Marathon in November in an effort to raise money for The American Cancer Society. Through the feature, I connected with so many amazing Mother Runners and more than ever I feel blessed to be a member of this tribe of kick ass women.