I thought it was gone forever and I was ok with that. After all, the ring was not Joe - it was just a thing. My real loss was my husband, my best friend, my son's father, and I live with that loss every day. I was sad when I lost his ring, but in the grand scheme of loss it was minor and I hadn't given it a thought in at least a month. But here I sit, typing away at this blog with Joe's wedding band back on my finger. As my cousin put it this afternoon, a Groundhog Day miracle! 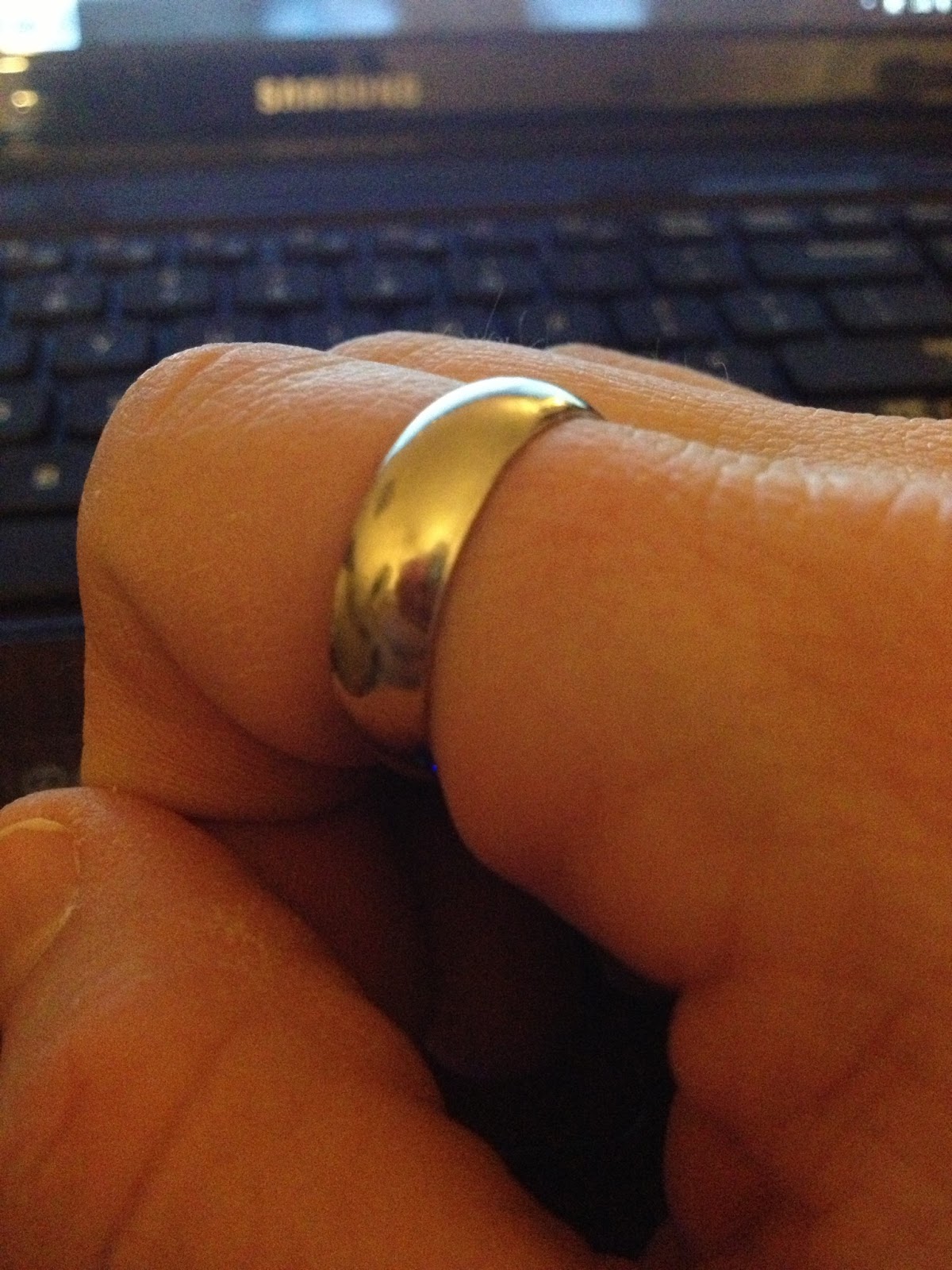 If you're new to my blog or just forget the story of Joe's missing ring, it goes back to my epic Afghan Whigs in NYC weekend in October 2012. After arriving home from the Terminal 5 show, I realized that the ring was missing. I knew I had it with me at the show so I searched the car and when I couldn't find it, I resigned myself to having lost an important memento which I probably would have passed down to Domani someday. I cried a bit and felt exasperated, but when I went to the Afghan Whigs show the next night at the Music Hall of Williamsburg and they played Band of Gold it was as if the whole universe was telling me it was alright. It was the only time on their tour they would play that song, so excuse me for thinking it was meant for me and my particular situation.

Fast forward almost 4 months to today. I was replacing Domani's car seat in our personal vehicle after a trip with my cousin and her family to see Disney on Ice when I saw Joe's ring sitting on the seat of the car. My heart jumped and a tear formed in the corner of my eye as I reached down and placed the ring back on my finger. I glanced up towards the sky and let Joe know that I felt him near. I couldn't describe that moment if I had a thesaurus full of words. In fact, my mind is still racing about it. And lest you be tempted to leave a comment that I must keep it in a safe place now, I've already been warned by a friend that if I lose it again (this was the 2nd time I had lost it), she's going to kill me. She might be serious and I love her for that.

Postscript - I have a friend for whom tomorrow's Superbowl (aka day 172 for him) will be bittersweet no matter what the result. He will be cheering for the 49ers just like Domani and I were cheering for the Giants this time last year. My thoughts and prayers are with him. I thought it appropriate to also share my CaringBridge post from last year's Super Bowl now. It brings back sweet memories even though I obviously have no skin in the game this year.

I'm still pinching myself. The night before Joe passed we were watching the Giants play the Packers. At that point we were certainly not thinking Superbowl Champion and Giants would be in the same sentence this season. I guess we'll never know how much of that game Joe was really able to soak in, but what I do know is that with every game since then (only one of which resulted in a loss) Domani and I have felt him with us. It's amazing how something as simple as cheering for a team can create a long-lasting bond.
Joe was the one who brought me over to Giants fandom from not being much of a football fan at all. It started when he made me wear his Giants jersey after I lost a bet involving a Giants game. It was the 1996 season and I've been cheering for them ever since. Earlier today, when I saw Joe's brother Jimmy, he was wearing that same Giants jersey - which he had found somewhere among Joe's things. What a nice moment.
Tonight, I watched with knots in my stomach as the Giants came out strong in the beginning and then had 10 unanswered points scored against them leading into halftime. If I had realized what was going on, then maybe I could have spared all of us Giants fans all the undue stress of the game. You see, the Giants performance was directly related to where I was sitting. When Domani and I were in Joe's chair, it was the pits. When I was anywhere else it was as if heavenly angel(s) were running the Giants show.
Those first 9 points? I was at the table eating dinner. That Chase Blackburn interception? I had left the room to nurse Domani. Shortly after the Giants were forced to punt when the refs refused to call a pass interference penalty on the throw to Manningham, I got a hunch as to what was going on and decided it best if Domani and I spend the rest of the game sitting on the couch. I'm glad we did. Not long after, the Patriots were forced to punt and Manningham came up with the 38-yard pickup. With one minute left in the game, Domani had finally fallen asleep and lest I risk waking him up with a shout, I took him to his crib where he immediately cuddled up and fell asleep. During that final minute I stayed as far away from that chair as I could :0)
So, to any Giants fans reading this, my apologies for hanging out in Joe's chair so much tonight. It was a comfortable place to be but obviously Joe was able to keep the Giants on track much better with his chair free. I look forward to someday sharing with Domani the story of this season as a way to teach him about his Dad. And so that he has something to remember it by I just ordered the Superbowl Trophy pack. Someday I'm sure he will be really happy to have it and in the meantime it will be a nice reminder to me of my amazing husband who converted me to a Giants fan.