Sometimes the Mets Miracles Happen Off the Field

Last week, when Domani, my sister, and I arrived at my friend Scott's house to ride with him to the Mets game, Domani jumped out of the car and yelled not the expected "Let's Go Mets", but "3-2-3"! It was spontaneous and sweet and it was one of those moments of the 2016 season that I'll never forget. Who would have thought that come the fall we would be cheering with passion not only for our Amazin's, but also for our now-beloved section of Citifield. But, so it goes.


On November 21, 2015 Domani and I went to the ballpark bundled up against the cold and picked out our 2016 seats. How we ended up in Section 323, Row 5, Seats 10-13 may have been random, but I am convinced now that it wasn't without some divine intervention. We were coming off the high of a thrilling postseason and practically ran to the Caesars Gold section anxious to pick out the perfect 2016 seats. Aside from trying to pick a good view and a Saturday plan, though, we had no idea what we were doing. We just snatched up the first ones we came to that looked good. As we made our way through the checkout line to purchase our seats we were excited at the prospect of 20 games in Section 323, Row 5, but there was no way we could have known then what an amazing year 2016 would be for us and how special those seats would become.

As I sit here now, I am exhausted after a weekend of cheering on the Mets in Philly and I'm counting the hours until we are back at Citifield on Wednesday for the Wild Card game. Nothing has made me realize more what a miracle those seats became in my life than this time right now.


I'm not sure if there was a particular moment when our little crew in 323 transitioned from fans who cheer together at games to all around friends, but by the time 4th of July weekend rolled around we were planning our first tailgate and by the end of the season we were together in Philly watching the Mets clinch the NL Wild Card. Now I can't imagine my "Mets" life without Scott and Diane and Joe and the kiddos, friends, and family members that come with us. They really have become like family and our section has become something special.


Scott and I were the only ones who knew each other before the season began, but even our proximity in 323 came down to fate. After finally dragging Scott back into the excitement of Citifield last season, he decided at the beginning of the year to buy a seat in a 20 game plan. He was debating between a couple different locations within the ballpark and before I could get back to him with where Domani and I were sitting he let me know where he had bought - it turned out to be a seat right behind us.

To his left ended up being Diane and to his right Joe.

That's right. For those of you who go way back on this blog and had to re-read that to make sure you got it right...There was to be a Joe and his son sitting behind us and to the right at Citifield for the 20 games of our Saturday plan (well, at least most of them).

Let's pause here for a philosophical interlude from Anne. It's been repeated in posts on my blog more than once, but it has been on my mind a lot as this season, especially as the beauty of section 323 unfolded. It's this framed poster that my best friend Erin gave me not long after my husband Joe died. 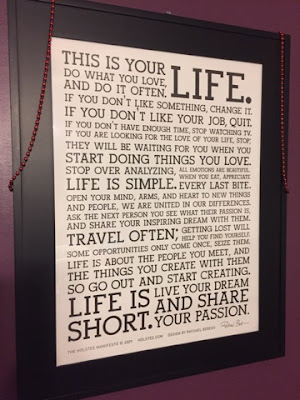 Erin knows me well and knows how Joe's death changed my perspective on life. The things listed there summarize it nicely, but what has blown my mind is the way that so many of them have come together in this last year.

I started attending games with Domani as a planholder after Joe's death in December 2011. Before that, Joe and I would go to several games a year and always try to make a trip or two to games on the road (we had been to DC, Philly, and Boston). That included the year after Domani was born while Joe was sick when we took Domani to his first game at Citifield and made a Labor Day weekend trip to DC for the Nats series. Becoming a planholder was my way of "doing what I loved and doing it often". In the years since Joe died, Domani and I have been there to witness some amazing baseball moments together and my little guy has become quite the Mets expert. The games have been our bonding time and the place where we bring friends and family to share in it. In no small way, they have been a place where we have worked through our grief and moved towards joy and meaning.

Perhaps that is what made this year in our section so special. Somehow, in the midst of the high fives and more than occasional hand wringing and face palms over our Mets, we ended up talking life. We have gotten to know about each other's joys and pains, hopes and fears, and, whether our team was winning, losing or desperately clinging to one last sliver of hope, the Mets kept our bond together.
With our crew in 3-2-3, we're there for each other not only at games and when it comes to the Mets, but in the "other stuff" of life too. There are plenty of places where our views on life and the Mets diverge (The Mets ARE just fine without Daniel Murphy thankyouverymuch and don't even get us started on the presidential election) but when you find the fellow widowed mom who will call you up on the day your son starts kindergarten just to check in sitting behind you and to the left at the Mets game, you have won no matter how many times your team has lost.

As if finding some amazing new friends for you and your son weren't enough, section 323 finally did for me what all of the dating apps under the sun for the last 4 years could not do. In a plot twist that truly belongs in a movie (perhaps one a la Fever Pitch?), I started dating the guy who sat behind us and to the right at the Mets games. The guy named, of course, Joe. I waited for something to go terribly wrong because it always does. I expected some epic bad news that would send everything off the rails. But the truth is that I started this 2016 season ready to root for the Mets with my son and my friend Scott and I am now staring down the postseason up one fabulously supportive girlfriend and an amazing relationship.


One thing that many of us who have been through a loss talk about are the "signs" you encounter afterwards which serve as reminders of your loved one and encouragement along the way. My grandmother (G-Mom) who died in February came through big time on the Mets signs this year and she wasn't even the Mets fan in our bunch.

It all started with the guys. At some point about a third of the way through the season the male half of our section started a little cheer to encourage home runs from our Mets. AP-PLE. AP-PLE. AP-PLE. It was all in reference of course to the Mets Home Run apple of which my son is a huge fan. (We also randomly chant "Broccolini" and "Cauliflower" but don't ask about that because I'm not sure I could explain it.) The AP-PLE chant was simple and contagious. The kids, of course, loved it. I feared that my 5 year old would at some point be chanting it in public and have it mistaken for a much more dubious hockey chant. But it stuck and cheering for the Home Run Apple when the Mets were at bat became a 3-2-3 thing. And on at least one occasion it became a 3-2-4 thing as well. Maybe someday it will be a Citifield thing.

Three weeks ago when my family gathered to sort through my G-Mom's Christmas things I was feeling overwhelmed. There were many reasons, but mostly because the one thing I really wanted to do was to talk with her about the joy in my life - how proud I was of Domani starting kindergarten given all he was going through, how happy I was to be dating Joe, and how great it was to have Naomi living with us in NJ. But I would never again be able to have those conversations with her and having that realization sink in once again made me so sad.

I was talking to her in my head about those things while looking through some of her ornaments when I came upon a whole bunch of APPLE ornaments. There they were. No one knew quite why she had them or if she even put them up every year, but there they were. I couldn't show them to Domani fast enough. Somehow, with those apples packed up and on their way home with us I felt complete peace. It was as if G-Mom had answered all of my anxious ramblings with a simple found gift.


After that it seemed like apples were popping up everywhere. In the store. On the radio. Wrapping paper I found buried in my closet from over a decade ago. Domani even spent a whole week learning about them in school during which time he perfected his "apple" chant in Spanish (manzanas). You can say it's just the time of year, but I'm calling it a nod to 3-2-3 and all of the goodness that has come from this year - the fun times shared, the friends made, and the anticipation of what still lies ahead. We couldn't have asked for a better group of people to find their way together and I am beyond thankful.

We won't be sitting in 323 on Wednesday for the Wild Card game, but we'll all be at the ballpark and undoubtedly at some point the Apple chants will ring out. I can't wait. 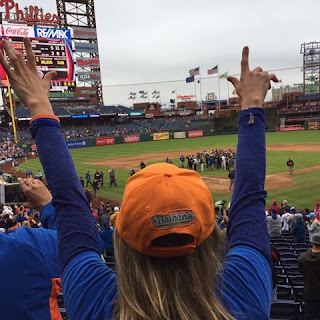