I am not his Dad - A Father's Day Post

This will be the 4th Father's Day since Joe died. By this point the routine should be familiar, but somehow it seems to be getting more difficult. As he gets older, my little guy is growing more and more aware of how he misses his dad, and so I am finding that days like this are becoming trickier to navigate.

Two weeks ago we looked at cards and picked out ones for his Peepaw, Grandpa, and PopPop. At the same time, I picked one out for my Dad. After that, we were done. I no longer have any Grandpa cards to pick out and Domani doesn't have a Dad card to pick. That's still hard.

The time following that card selection has been rocky in our house.

Not long after picking out the cards, I saw a strange toilet paper ad in my Facebook stream with the hashtag #HappyFathersDayMom. It reminded me of the times over the past several years when I have noticed attempts by well meaning people to acknowledge single moms on Father's Day as playing both the role of mother and father. I've been thinking about this quite a bit since then as I've watched Domani deal with the ways in which his misses his Dad and the ways in which I struggle to parent him through his loss.

He sees his cousins with their dads and his friends with theirs and his ache is obvious to me. He may not have specific memories of his dad beyond what he has been told or has seen in photos, but he knows that he misses his dad and he isn't shy about saying it. Quite a few times over the last two weeks there have been "I miss daddy" moments. In a few cases, he wanted to look at a book that has photos of him and his dad. A couple of times he just cried about how much he missed him. Others he just said he missed his daddy and moved on to battling bad guys or watching a video on the iPad. 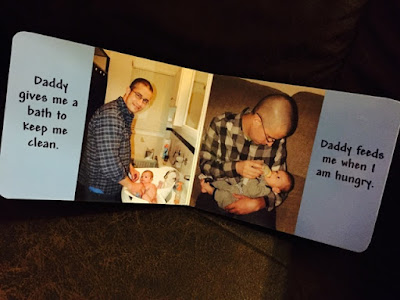 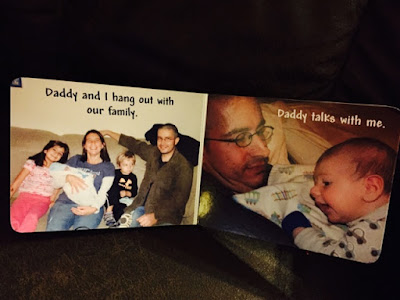 My son has many men in his life who have stepped up since Joe's death to love and support and teach him. These men are not his dad, but they each play a special role in his life. Peepaw, Granpa, PopPop, Uncle Chris, Uncle Jimmy, Uncle Derek, Uncle Sam, Uncle Scott, among others. All are men who Domani relies on in one way or another for his growth and well being. I rely on them too.

It has taken many of us to begin to fill in the gaps left in Domani's life by Joe's death.

But just like they are not his dad, I am not either.

I may kill the spiders crawling in the corners of his room while he shrieks from his bed, but I am not his Dad.

I may talk Minecraft and Disney Infinity with him and troubleshoot iPad apps until my brain hurts, but I am not his Dad.

I may teach him about Mets players and Mets history and how to bounce back after losing (a key lesson for any good Mets fan), but I am not his Dad.

I may explain to him how football works and cheer for the Giants with him, but I am not his Dad.

I may play Superheroes with him, battling bad guys all around the house, but I am not his Dad.

So when Father's Day comes around and I think of those well meaning attempts to embrace the efforts of single moms, I know in my heart that I don't want it to be a day of acknowledgement for me or anything that I do. I know that my son still needs space within which to grieve his dad (or not to if someday that's his choice) and I will always allow him that on this day.

It's not my day and it never was. And no matter how much I do for my son, Father's Day will never be a day to honor me.

You see, each day I am the best mom I can be given the hand we've been dealt, but I will never be my son's dad. He's only got one of those and we all miss him dearly. Maybe someday there will be another man in his life who he chooses to also call dad, but for now, for our little family, this day is a celebration of Joe and all that he has brought to Domani's life, including the many amazing men who have stepped in to play important roles going forward.

So, Happy Father's Day, Joe. On this day, my son has an amazing dad to remember and without a doubt your legacy will live on in a thousand different ways.
Then, when Mother's Day rolls around again next year anyone reading this blog can feel completely free to shower me with all the praise you like for the things I do to keep this one parent household running. (I will never turn away bottles of wine or gift certificates to 40-One Salon and Spa, but please be forewarned that I've been known to kill all types of plants and flowers.) Perhaps, just maybe, I'm not such an all-around supermom after all.