The Mystery of the Christmas Lights

Towards the end of last week I read a book called Words at the Threshold by Lisa Smartt. It's mostly an examination of the words people say as they are nearing death, but there were also some parts that dealt with experiences of family members after the death of their loved one. The timing of reading Smartt's book could not have been more perfect because it had a section titled "Doorbells, Alarms, and Lightbulbs" and I was having some of my own issues with such things in this week leading up to the 10th anniversary of Joe's death. I found that two and a half page section to be speaking directly to me and it was both liberating and heartwarming.

You see, I've been down this road before with things not working as they should. Not long after Joe died Domani and I took a trip down to Washington, DC. We had done the same trip in the same car (the one that belonged to Joe) together as a family the previous fall to watch the Mets play the Nationals. This time though, the car stereo on this not-even-2-year-old SUV decided to completely crap out just as we were ready to leave. I tried everything I could think of to get it working again because the prospect of a 3 hour drive with no music seemed truly awful. I remember talking to Joe, asking him to help me fix it and wondering if this was all just him trying to get my attention.

Then, at some point (I don't remember exactly when) it just started working again. No service required. No rhyme or reason. No obvious intervention on my part. It just started working again. Common sense told me it must have just been a loose wire or a faulty connection that resolved itself when I went over a bump. I'm sure there could be a thousand logical explanations and so I chalked it up to a quirky coincidence even though I knew in my heart it connected me back to Joe.

Then, I started hearing stories from other widows. They shared with me their own interactions with electricity and every day items that require power to run. Clicking off and on. Working and then not working and then working again. All at moments or in ways that had some particular significance. Many of them felt the same presence, the same saying hello as these things happened that I did with the car stereo. I found comfort in those stories and told Joe that I'd listen and pay attention.

Fast forward to now and the story of Joe's little tree and the outdoor Christmas lights.

We have a tree in our home that we call the "Joe Tree". It was the tree that he had in his apartment before we were married. His mother had bought it for him and started him off with a selection of ornaments so that he had some Christmas in his place. I love her for that. It has white lights and a beautiful gold star tree topper that also plugged in and lit up. Our favorite ornament that goes on the "Joe Tree" is a naked Peter from The Family Guy holding a strategically placed present. The tree is both fun and sentimental.

Joe and I continued putting up his little tree in our home after we married and when he died it took on an extra special meaning as Domani and I put it up each year. We add to it ornaments from places that we have visited. It's our way of sharing those adventures with Joe.

This year, we carefully brought the tree down from the attic and set it in its spot in the living room. We plugged it in and enjoyed its lights for a few days before putting on any ornaments. Wouldn't you know it though that just as we were preparing to decorate, the lights stopped working. Domani decided we would replace the white lights that weren't working with new multi-color lights. And then we plugged in the star which was also not working. Obviously it's not unique for lights to stop working. Any of us who have cussed out a strand of lights while trying to decorate can attest to that. It's the timing and 1-2 combo of the lights and the star that caught my attention and once again had me noticing Joe with a smile and a quiet nod.

However, I was not at all prepared for what happened next.

It was time for the grand finale of "Doorbells, Alarms, and Lightbulbs" - this time with the outdoor Christmas lights. My mom had offered to help me put up the rest of the outdoor lights I hadn't gotten to so they would be up when we held Joe's remembrance yesterday. On Friday afternoon, she came over and put up lights on our trellis, bushes, and along the back fence. When night came and the lights clicked on I noticed there was one strand along the fence that was completely out. I tried adjusting them that night and even took a look the next morning. I just couldn't figure it out and had resigned myself to having one strand out for the Christmas season.

When I told my mom about it she confided that she hadn't tested the lights, just asked Joe for his help in making sure they all worked. She jokingly complained that Joe hadn't done his job and we both got a laugh.

That night I arrived back home to the lights still out. I left the house for all of 2 hours and when I came back the strand was ON! I immediately was thankful to my mom for coming over and fixing the lights. Except that when I asked her about it the next morning, she said it wasn't her. At that point, there was no holding back the tears because we both knew in our hearts what had happened. I'm done trying to find logical explanations for things that are, in fact, liminal in nature.

There are ways that Joe still says hi even 10 years later and sometimes that way is as simple as turning on the lights. 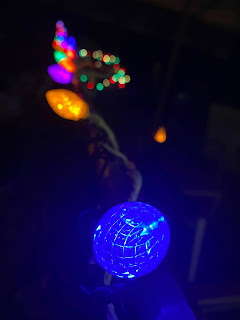