A Season of Challenge

This past week marked 6 years since we found out Joe's cancer diagnosis. It was all part of one roller coaster week in my life that I will never forget. This time around it came on the heels of what was a difficult December and more than two weeks of sickness which started off my New Year. Needless to say, I am at this point so incredibly weary.

The place I have turned repeatedly for respite over the last two months is deeply familiar. It's the Psalm I memorized while I was still in school. It took on new meaning for me during Joe's illness when I would pray the beginning like a mantra. These past two months, I have worked on re-committing it to memory and I pray it while I'm doing my training runs, driving to and from work, trying to fall asleep at night, making dinner, and especially when I'm taking a break for a good cry. 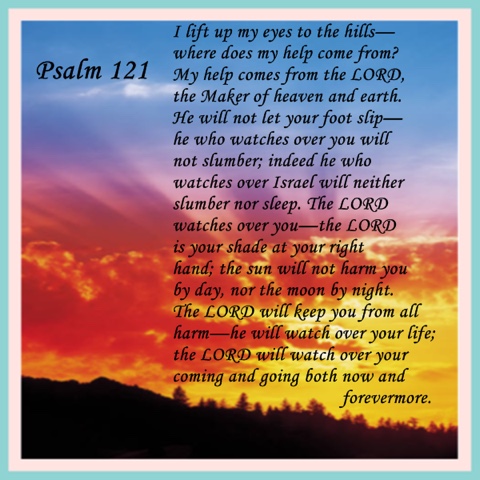 There have been some truly tough moments over the last two months.

Domani has been much more focused on his dad and how much he misses him. In Domani's preschool, they spent the month of December talking about families. It led to many art projects, all with a seemingly different rendition of his family. One with Domani and Mom. One with Domani, Mom, Grandmom, and Grandpop. And, of course, one with Domani, Mom, and Dad. He decided the last one was a secret. Once he got it home, he would only talk about it with me.

There has been lots of death. Friends dealing with the death of loved ones and providing care for family members in their final stages of life. Members in our own church family who have recently died. The tears that came with hanging on my tree the very last Christmas ornament that I will ever get from my Aunt Jimmie. Christmas. New Years. The increasingly cold, dark days.

Then there was the night about a week and a half into my being sick when Domani was getting settled into bed and he dropped one of those soul-crushing questions on me. "Are you going to die like Daddy because you've been sick?" His eyes were filled with tears and I could tell he had really been thinking about it...probably the whole time I had been coughing and sniffling and catching naps on the couch. We worked our way through this one, just like we have with dozens of other tough questions, but it is all really taking a toll.

Thankfully, one of the things I have learned over the past two months is the power of saying no. It's the freedom that comes with knowing my own emotional, spiritual, and physical limits. For me - a perpetual do-er - this has not come easy. But, as I think over the times going back to December when I have passed up an invitation I would have normally accepted or have chosen chill time with Domani or personal rest time over time DOING, I see the difference it has made.

Is there a part of me who wishes I had taken up my friend on the invite to watch the Rangers game from a suite? Yes. Do I sometimes regret not being at that rally or speak out? Absolutely. Are there times when I wish I went out for Friday night drinks with the girls? Obviously. But then I see the spiritual, emotional, and physical benefit of knowing my limitations, and I am convinced that I would not have made it through this rough season in my life without drawing those boundaries. I have a limited amount of time and energy and I owe it to myself and my son to focus on those things which will create meaning in our lives now and in the future.

Wednesday of this week would have been the day 6 years ago when Joe was rushed to the hospital. This year, as I left the house at 5am to get to the pre-conference for a union election, I felt a tug. It's still hard even 6 years later not to acknowledge when it's "the" day. And at 8:30pm when the day was over and I was driving home, four years since he's been gone wasn't enough to erase the tug of wanting to call him and debrief the workers' election win and the rest of the evening. Win or lose, he always was my first phone call when I got in the car to head home.

Life is different now though and has been for years. So instead of calling Joe, I lifted my eyes to the hills (of NJ) and knew in my heart where my help comes from - even when the night is dark and the road feels hard.