I'm still on a high from last weekend. Maybe it was the fact that on Saturday morning I beat my personal best 5k time by more than a minute. Or that on Sunday morning I not only met my sub 2 hour goal in the half marathon, but crossed the line in 1:51:30. Or maybe it was that I did it all with my two best mother runner friends recording their own PRs in both races. Of course, it could have also had something to do with getting to go to my first ever regular season Giants game on Sunday afternoon - even if it was only to watch Eli get picked off endlessly in the end zone.

If I were being completely honest though, it would mostly have to do with the great company I had for the weekend - a friend who made 3 days pass like 3 minutes and whose visit left me happier than I thought possible. Cloud 9 is a place I wasn't sure I would ever occupy again when Joe died in December 2011. But somehow, I have found myself recently with more and more cloud 9 moments and I'm so thankful for them.

My friend Erin shared this image about two months ago during what was a tough time for me and it has stuck with me and inspired me in different ways ever since. When I read it again before the Philly weekend started I realized just how far I have come in all aspects of my life - physically, emotionally, mentally, and spiritually - in just the last 6 months. 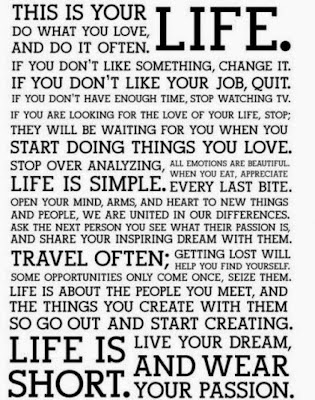 Marathon training has done wonders for me in each of these areas, but it hasn't been just running that has brought about these changes in me. It's been a few key relationships that I have taken time to make sure I maintain come hell or high water in the midst of a busy schedule. It's been making sure I say bedtime prayers with my little guy and get to spiritual direction once a month. And it's been a more conscious effort to track what I feed my body and my mind. Oh, and really, really, really trying to get some sleep.

All of that is to say that I was in a good place coming in to the Rock N Roll Philly Half Marathon weekend. My goal was a good 5k race on Saturday morning for the Undy 5000, a fundraiser for the Colon Cancer Alliance and then my very first sub-2 half marathon on Sunday morning. The weather forecast was looking good. My mother runner friends Malinda and Melissa were in town for both races. My friend Justin had come in for the weekend and my training had been going so well. I had been steadily knocking time off my 5k races all summer. I had a feeling it would happen again - I just had no idea by how much!

Malinda held her speedy title of the group and hammered out the 5k race in a very impressive 22:38, taking first place in her age group. Melissa and I tried to keep her in our sights and managed our own personal bests - I finished more than a minute better than I did just two weeks before in Maryland coming in at 23:29 and Melissa was not far behind me at 24:34. We took 2nd and 3rd in our age group (until as a postscript two women finished WAY later but with faster times and pushed us to 4th and 5th, not sure Melissa even knows this...BOOOOOOO!) Regardless, it was awesome fun and there's not much like being able to walk around all day saying you won the race (even if you didn't technically win the race). As far as mother runners go, we felt pretty powerful and certainly ready to kick some half marathon butt.

The rest of the day went by quickly. A trip to the race expo to pick up our numbers and do some shopping. Lunch from Reading Terminal Market where we had also eaten the day before. A visit to hang out with Domani and watch some college football. A tasty but noisy dinner at Pietros. Then, it was time to finalize the playlist on my iPhone and lay out everything I needed for the morning - and I had to do it all by 11pm because apparently I had a lights out bedtime for optimal sub-2 performance. Although I was stressed trying to get everything done and I was not confident by 11:10pm that my playlist was exactly the way I wanted it, I went to sleep. This was the first time I have ever gotten a restful night's sleep before a race. I think it paid off.

I Need You by Scrawl
Don't Stop Believin' by Journey
Roar by Katy Perry
Hurricane by Bridgit Mendler
Enter Sandman by Metallica
Feathers by Coheed and Cambria
Call Me Maybe by Carly Rae Jepsen
A Cut Above by Avery Watts
Everlasting God by Jeremy Camp
Fountain and Fairfax by The Afghan Whigs
Shout at the Devil by Motley Crue
Girl on Fire (feat. Nicki Minaj) by Alicia Keys
Holding Out for a Hero (Glee Cast Version)
The Edge of Glory by Lady Gaga
Kickstart My Heart by Motley Crue
I Don't Wanna Stop by Ozzy Osborne
Shut Up and Drive by Rihanna
Fight for Your Right by Beastie Boys
Gasoline by Audioslave
Superman (Glee Cast Version)
Sweet Child O' Mine by Guns N' Roses
Titanium (feat. Sia) by David Guetta
The Warrior's Code by Dropkick Murphys
Funky Cold Medina by Tone-Loc
Solidarity Forever by Vayizaku
Gold on the Ceiling by The Black Keys
Friday by Rebecca Black
Black Betty by Ram Jam
Turn on the Water by The Afghan Whigs
Lose Yourself by Eminem
Shut Up and Drive by Rihanna (yes, it's a repeat)
A Cut Above by Avery Watts (yes, it's a repeat)
You Shook Me All Night Long by AC/DC
Big Foot by Chickenfoot

I didn't need anything past Turn On the Water because I finished the race in 1:51:30, much faster than I thought possible when I set out on my sub-2 mission. Melissa, God bless her, hung with me the whole time and even pushed me when I hit my mental wall right around mile 11. We maintained an average pace of 8'31" for 13.1 miles on a Sunday morning in September and we will talk about that morning with huge smiles on our faces FOREVER.
We grabbed all the water and chocolate milk and Gatorade and bagels we could get our hands on in the finishers area, found Melissa's husband Paul and then went off to find Melissa's mom and kids and Justin. Of course, before we left we posed for some triumphant finisher's photos!

Poor Justin had to listen to me randomly say 1:51:30 for the rest of the day. I couldn't help it. Even a week later it still seems a little unbelievable. I guess it will stay unbelievable until the next race - when I do something I didn't think I could possibly do. Mark your calendars for October 13th, people. That's when I will run the LBI 18 miler. Oh boy!

You would think that running a half marathon would be enough for one day, but in my world of "Do what you love and do it often" you would be wrong. So, after the half marathon, we took a quick triumphant mother runner photo in the lobby of our hotel and then Justin and I were off to the Manning Bowl back in NJ.
Obviously, I was wearing the shirt of the wrong Manning brother, but we had fun anyway. It was my first ever regular season NFL game so I was mostly able to overlook the fact that the Giants had a complete meltdown. We enjoyed our seats. The weather was beautiful. And we were watching the Manning brothers play some football. We also got to watch Bill Parcells receive his Hall of Fame ring in a special ceremony at halftime which wasn't nearly as exciting for Justin as it was for me. In fact, I'm pretty sure there were some not so nice words being mumbled under his breath while Parcells was speaking. At least we didn't hit any traffic on our way out since the Giants fans were kind enough to clear out early as the loss became more and more lopsided.
I read the Life poster again at the end of the weekend after I had returned to the rhythm of work with the excitement of the race weekend and Justin's visit behind me. The part that stuck out the most to me then was the end - "Life is short. Live your dream, and wear your passion." I feel like I have learned this lesson well in my 35 short years and I am finally doing it with gusto. I also know that nothing makes me happier than when I can take others along for an exciting adventure - whether it's running a race, taking a trip, or something even more life changing. I know I'm blessed to be able to do that and I don't plan on stopping any time soon. We get this life once and I, for one, love living it.
Posted by Anne D at 3:02 AM No comments: