One of Those Days

It's been quite a year. As I sit here in the wee hours of August 16th on what would have been my 10th wedding anniversary with Joe I can't help but think about all of the things that have already been packed into this year - and how they would have been different if he were still here by my side.


I imagine what it would have been like to have his support in January when my Dad went into the hospital and during each of those times that followed when the news seemed to be scarier than the last. I think back to the sleepless nights and countless trips back and forth to New Brunswick and remember how desperately I just wanted to be able to fall into his arms with whatever downtime I had. While I am thankful for our tight knit family and my incredibly supportive friends I know that it was measurably harder to be on that roller coaster of concern without him.

I think about the day in February while my Dad was still in the hospital when my mom called me on my way to church to let me know she had been in a car accident. I remember what it was like to pull up to the scene of the crash only to see her being put into the back of an ambulance. Once I was on my way to the hospital to meet her at the ER, I remember the overwhelming urge to just grab my phone and call Joe. But his number has been disconnected for years so all I could do was talk to the air through my tears. It's been over 6 years since I've been able to pick up the phone to call my husband and talking to the air is just one of the ways I work shit out in this life after Joe.

He was always my calm when I was on the high seas and there have been many times this year when his patient way and gentle touch would have made my path easier. Even now almost 7 years later and even though I have learned in some ways and at some times to emulate his patience and calm, there is still a certain emptiness that comes when I am faced with these moments. He's not here and so sometimes I stay on the high seas. Sometimes there are others who help. Sometimes I go for a run. And sometimes I talk to the air.

This year I turned 40. I never imagined I would do that without Joe. I suspect that if he were here the celebration with friends and family would have taken a slightly different form. He likely would not have planned a brunch where people run a collective total of 40+ miles together before eating and drinking. But given that running has proven to be one of the most powerful outlets for my grief over these past six years, it only made sense to me that my friends and family would join me to "run in" my 40th birthday. Six of us gathered early that morning to run a 6ish mile loop through my neighborhood and then the rest of the crowd joined up to run a mile (or two if you got stuck running in the pack with me) in the park near my house. A few friends and family members got a pass on all the physical activity in order to get the food and drinks ready while we ran.

We covered well over 40 miles and I felt so much love that day. The icing on the cake (of which there was a homemade Mets one from a friend in my running club) was that both of my parents were able to join us for the festivities. After all that they had been through during the first two months of the year, that was really all the birthday present I needed. 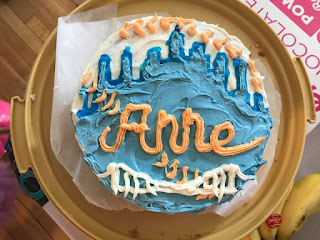 Not long after my birthday, there came a big day in the life of Anne. On March 22, I was appointed to my local Board of Education and then later I was honored with a Power of Women in the Labor Movement Award. It was a special night and I am thankful that I had my son as my date to the Awards dinner and plenty of friends there along with my parents. But I realize more and more as the years go on without Joe that it's when I return home after these kinds of nights that I miss him the most. It is those times when I'm either on top of the world or feeling lower than dirt that I just want to be with someone who gets me in the context of the whole back story of me. He certainly did that in a unique way and I miss it.


On March 29, it was Opening Day for our beloved NY Mets so Domani and I went as we always do to officially welcome in the baseball season. It has become a tradition for us since Joe died, something we do to spend time together and to be in a place that reminds us of Joe. A reporter started talking to us while we were waiting to get Domani's Kid's Club passport stamped and we ended up on the CBS 5 o'clock news during a segment on Opening Day at Citifield. We talked about Joe and how we go to Opening Day to keep his memory alive. It was a beautiful segment, complete with Domani spinning the prize wheel (just like we always do) and winning a t-shirt on camera. I remember getting home that night, falling into bed, and marveling at the twists and turns that had brought my son and I to that point in our lives. That news segment coming on Opening Day for our Mets at a point in my life when so many other things were feeling hard felt like a little hug from Joe. It's a hug that I feel like I've gotten many times throughout this year in many different ways and for that I am thankful.

One thing that I suspect I would not have gotten myself into this year had Joe still been alive is the crazy Spartan Beast race I did in celebration of my 40th birthday. My guess is that we would have taken a fabulous trip somewhere instead. But since I was the one doing the planning, it was off to Mountain Creek for me. I have done a lot of races since I started running in 2012, but none as physically, mentally, and emotionally challenging as the 13+ miles and 30+ obstacles of the Spartan Beast race. I feared that I was doomed from the beginning when I couldn't even hoist myself over the wall to get into the start corral. Thankfully, a kind soul gave me a boost and with some perfectly timed pump up music before our start I hit the race course determined to put it behind me. When I came upon the same wall within the first few obstacles I almost froze in my path. Instead, I found something deep within me and just went for it. I lifted myself right over on the first try and then promptly shouted "HOLY SHIT I DID IT!" over and over again. It felt awesome.

I had the "HOLY SHIT I DID IT" moment again with the "Bender" obstacle. By that point I had already done penalty burpees on the Tyrolean Traverse and I had no interest in doing more. In my mind I was going to do everything possible to get by that Bender obstacle without subjecting myself to another set of that misery masquerading as exercise they call burpees. A woman who I had been chatting and racing with through a couple of obstacles helped make sure I secured myself along the first rung of the Bender and then I started working my way up and over with some other racers on the ground giving direction as to how to maneuver myself. I am certain this obstacle is where I racked up most of the bruises on my body as I both clung tightly so as not to fall and pushed through many awkward and painful positions to get myself over the obstacle. Once I was finally over and safely on the ground, I almost cried. And that was only a third of the way through the race.

There were so many things in that race that I thought I could never do which I did. Carry this huge stone. Climb over this wall. Crawl under this barbed wire. Keep going up and down this mountain all day long. Go under this dunk wall. Carry this bucket with rocks along this path. Burpees. Burpees. And more burpees. Carry this sandbag down this hill and back up again. Penalty hike up this mountain for missing the spearthrow. And this one for falling off the Twister. Keep going through the pouring rain and in the thunder and lightning as they close the course while you are less than a mile from the end and then wait to hear if the race officials will even let you finish. By the time it was over I was soaking wet, bruised, bloody, and happier than I had been in a very long time.

It took me weeks to recover, but it only took me hours to decide that I would be finishing the other two (shorter) length Spartan races this year in order to complete my Trifecta. I've got my eye on conquering Mountain Creek again in October and I plan on doing way fewer burpees this time around.

This year I also opened the last gift I ever received from Joe. Music was always one of the things that kept Joe and I connected. We loved going to shows together, listening to music at home or in the car, and learning new things about our favorite artists. Joe always seemed to be the guy who knew everything about everything when it came to music. It should come as no surprise then that, unbeknownst to me, he had pre-ordered a CD recording of the NYC show for the Greg Dulli tour we saw in Philly in 2010. That Philly show was the last one we saw together. We had tickets for the one in NYC too, but between having a baby at home and Joe not feeling 100% we decided that one show would have to be enough.

The CD arrived about a month and a half after Joe died and although I had opened the envelope (which was addressed to him) I had left the CD in its packaging. Until this year. So, in May, on the day that was 7 years from our last show together, I opened it. Listening to that album was one of the greatest moments of catharsis I've had in awhile. It became a special part of my year and I keep the CD in my car for those times when I want to have some moments with him where I'm doing more than just talking to the air. 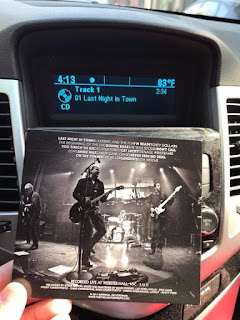