The Dinner of a Lifetime: Eating at Alinea

There have been a few dinners in my life so far that I remember vividly and with great fondness. Not long after September 11th, it was a lovely and very expensive French restaurant in Lower Manhattan with two good friends. In 2008, it was a special meal with my Joe at the Omni Parker House while we were in Boston on our honeymoon. We sat at the table where JFK proposed to Jackie - it was a romantic dinner steeped in history. 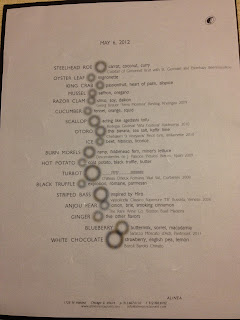 Then, on Sunday, May 6, 2012 it was the most amazing meal I've ever had with one of my best friends, her brother and his girlfriend. My friend Erin had to make the reservation at Alinea months in advance of our visit to Chicago. I had to save up nearly that long to cover my portion of the bill. But it was 3 hours of culinary ecstasy - a tasting menu that extended 18 courses with a wine pairing that brought us tastes of 10 different adult beverages. The service was exceptional. We had the best table in the restaurant. From the minute we walked in the restaurant until the moment we left, it exceeded my expectations. 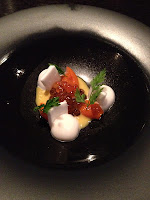 It was my first time having any kind of roe. The combination of the carrot, coconut, yellow curry, and roe was perfect and left me very anxious for the next course.

These four courses were brought out at the same time perched on Malaysian driftwood covered in seaweed. The photo just does not do the presentation justice, but it gives you the idea. While I have had oysters before, each of these four foods were new to me and I think my favorite of these courses was the Razor Clam. I won't soon forget the visual of our waitstaff bringing out this course on these large logs - it was surprising and fitting at the same time.

I must have been very distracted when our waitstaff brought over this course. Somehow I missed the two times he mentioned that it contained squid (once to Erin & Nathan who also had some sort of meat on theirs and again to Melissa and me). It was probably for the best because having never eaten squid I almost certainly would have hesitated. Instead, with Melissa watching me across the table I followed the directions given to us, leaned in and ate the bite like it was nothing. It was so tasty and I didn't find out about the squid until I had more or less finished it. Funny, since when I looked at my photos after, it was QUITE OBVIOUSLY squid.


At some point after Courses 2-5 were brought out, an interesting contraption was placed on our table and the flame at the bottom was lit. The top compartment was filled with vegetables and the bottom bulb area with water. I felt like a kid in science class watching the water bubble up and the veggie juices start to create the broth. We were all intrigued by how it would be used in a course and were blown away when the broth was combined with sea scallop made to resemble tofu. Once again, delicious and thoroughly interesting.


This course was served in a fishbowl looking orb and it was described to us as containing foaming seawater. To me, it felt truly tropical. The tuna melted in my mouth and the bits of lime were a perfect balance. While it wasn't my first time eating tuna, it was my first time having anything that resembled sushi. Another excellent course both in taste and presentation. (On a side note, by the end of this course, I was feeling a little tipsy from all the wonderful drinks we had been trying up to this point.)


This lovely piece of intrigue was the centerpiece of our table from the time we were first seated. We, of course, asked about it, but were told we would just have to wait for the full reveal at some point later in the night. We examined it and brainstormed about what it could be. At the beginning of the meal I mentioned that I thought it looked like 4 vials of blood in a block of ice. This photo taken shortly before we were given permission to finally dig in makes it really look like I was right. Thankfully, we didn't have to wait too long into the meal to uncover the mystery. We were brought large straws for our ninth course and told to suck up the beet juice in the block of ice. It was delicious and fun and a great photo op too.

This course was served on top of a bed of stones. By the time I finished, I found myself licking the remaining sauces off the stones - they were that good. I was a bit nervous about trying the quail egg as I had never eaten one before, but it was creamy and not overpowering, a pleasant surprise. Again, a really cool way to serve an interesting course.

The waitstaff who brought us this course wasn't shy about telling us it was his favorite. This was another one which required instructions on how to properly eat it. We were told to hold the small wax bowl in one hand and with the other pull out the pin that was supporting the potatoes and truffle in order to release both into the liquid. Then, it was a matter of moving quickly and finishing it off like a shot. When that waiter came back two courses later, I told him I had to agree that it was indeed the best course up to that point (and in retrospect I think it was my favorite of the night). I had never had a black truffle before and it was absolutely decadent. Lucky for me, I would have another shot at black truffle in Course 13.

This course first caught my eye as we were waiting to be taken to our table. We were able to watch the kitchen through a glass partition while we were waiting and I remember salivating with incredible curiousity as one of the waiters carried it out of the kitchen and off to a table. When it was our turn it was equally awe-inspiring. I received turbot (a white flatfish) cooked 3 different ways and our table received a tray with more than 60 garnishes. Our instructions were to choose 2-3 garnishes for each preparation of the fish. The fish itself was divine, but with the garnishes it was positively exciting. It felt like an adventure as we each chose different garnishes and then tested them out, trying our best to guess correctly what it was we just ate. Mercifully, about halfway through the course, our waiter brought us a key for the garnishes. It reminded me of how you match up the chart in a box of chocolates with which has dark chocolate and which has nuts.

We were warned with this course that we should be absolutely sure our mouth was closed before biting into the ravioli and boy was that good advice. Explosion was the perfect name for this course because that is exactly what it did when you bit into it. My second experience with black truffles was just as amazing as my first. 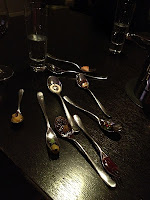 Course 14: Striped Bass inspired by Miro - spoons with lots of goodies including pureed prune, an olive, and many other things I can't remember (with Valpolicella Classico Superiore 'TB' Bussola, Veneto 2006)


I readily admit that while I enjoyed this course I cannot remember half of the things I ate during it. Melissa and I took turns deciding which thing we would eat next. The one thing I remember clearly is that on one of my turns I chose the olive and it made me think of Joe. He was always an advocate of me eating olives and it wasn't until the last year or two that I actually started to enjoy eating them. I'm sure it was the sentimentality but this one was particularly delicious. 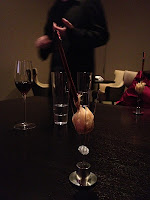 Course 15: Anjou Pear, onion, brie, smoking cinnamon (with The Rare Wine Co. 'Boston Bual' Madeira)
The most interesting part of this course was the smoking cinnamon stick that held the ball of pear, onion and brie. It smelled fabulous and was the perfect transition to dessert mode. The course was tasty and the wine that was paired with it was particularly good. 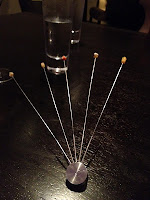 Course 16: Ginger and other flavors

This was a quick course, really just some refreshing flavors, but it was fun and a great lead in to the final two courses.


This course was rattling when it was brought out to our table until we lifted the cap from the liquid underneath. Then, our waiter came around with an exciting finishing touch. There was lots of yummy sweetness to eat and another giant straw to slurp up the green goodness from the bottom of the bowl. It was a great dessert, but since a photo won't do it justice this is one you will have to watch on video. 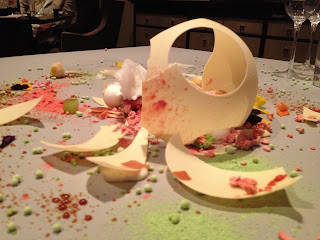 You know you are in for an exciting course when they bring out a covering to protect the table. They moved us all to one side of the table so we could watch the presentation of the course. I have never seen anything like it and Erin and I literally laughed out loud while the chef was spreading powder and pansies and other various food items all over the table. At the end when the chef picked up the globe of white chocolate, smashed it on the table, and then walked away, I was in a state of uncontrolled glee. It was the most fun I've ever had at dinner. The video I shot is unfortunately too large to upload here, but the photos will give you an idea of how much fun we had. My favorite part to eat was the white chocolate and if I weren't so stuffed from the rest of the dinner I would have easily eaten every last piece that was on the table!


THE END!
Three hours after we began we were done with our meal and on a culinary Cloud Nine. The meal has stayed with me all week and is definitely one of the top meals of my life to date. I'm glad I was able to share it with three wonderful people and that in this meal I was able to experience a brief respite from the single working mom grind to which I have become so accustomed.
Posted by Anne D at 1:38 AM