In Appreciation of Those Who Tire Out My Son

I am thankful for people who help tire out my son. Today it required a whole entourage as he was in Energizer Bunny mode for most of the day. He napped for less than an hour all day, going full steam by 7am and not crashing until the car ride home shortly after 9pm.

First thing in the morning Domani had Grandpa, Meredith, and my Aunt Nancy to keep him company while I tried my hand at selling some things as part of the Jamesburg town-wide yard sale day. He helped Grandpa put the canopy up on our gazebo, blew bubbles with Meredith, and ran all over the yard while Aunt Nancy helped me with setting up for the sale. After a long walk with Grandpa, he settled down for a short nap, still in his stroller.

It wasn't long before he was up and ready for action again. He got to play with Grandmom for a little while and later was running around with Aunt Karen and Catherine. He ate a snack and tried to feed a blueberry to a bird by running the blueberry over to the bird. He played open the gate and close the gate with Catherine. He collected acorns and played with sticks.

By then, it was time for lunch.

After a walk in the afternoon heat, the "Mayor" of Mendoker's arrived to get his lunch and a few cookies. He and Catherine ran around the bakery and then ate at the table outside. After devouring most of his turkey and cheese sandwich, Domani took to walking over to Catherine and feeding her bits of turkey. He was back in action and joined me once again in Mendoker's to pick up a sandwich for his Uncle Jimmy. On our way back to the house he munched on a chocolate chip cookie and once we were back at home it was time to play with Kenny & Ty. He was so excited to see them and the three of them with Catherine had fun playing together - first outside and then in the basement.

I thought for sure he would be ready for a good long nap, but he was much more interested in exploring the living room and dancing along to Sesame Street (thanks, Elmo & Grover!)

After his non-existent afternoon nap, it was time to head over for a wonderful little cookout with some fun friends. Rose and Jeanne were great hosts and Domani could not have been happier to play with Oscar and Hubert and to get attention from Seth, Ann, and Ken. He ran all over the yard, laughed hysterically, and even tried to take a bath in the beer tub. He ate some delicious salmon and potato salad and followed that up with some fruit and cookies. He checked out every nook and cranny of the garden and climbed the stairs to the deck over and over and over again. We were all tired by the end of the night.

Thankfully, my entourage of play partners from throughout the day had made sure that Domani was equally tired. I heard him playing with his Sing-a-Ma-Jig from the backseat of the car for the first two minutes of our ride and then it was the radio silence of exhaustion. He barely let out a peep as I carried him inside and placed him in his crib. 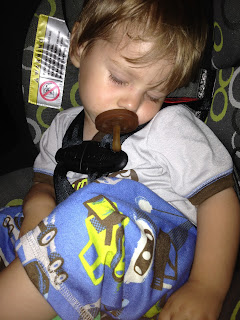