Music is Life - The Afghan Whigs Reunite at The Bowery Ballroom

I remember exactly where I was when I got the news about the Afghan Whigs. It was two days after my husband had passed away and I was in the hallway of my house when I got a text message. It was 5:36pm and the text was nothing more than a link to a story on Pitchfork from one of my best friends, but I could tell from the link what it was about - The Afghan Whigs to Reunite for ATP.

It was more than a decade before, just about 12 years to be exact, that I had seen them perform at Bogart's in Cincinnati. It was one of the most memorable concerts I've ever attended, not just for the band and the location and the timing, but for the happenstance that came with it. More than 600 miles from home, I ran into Joe (at the time my ex, later to be my husband) standing in line outside the venue. We had each made the trip separately, each with a friend, each without the other knowing and there we were once again brought together by the band that worked like glue on our relationship.
When I heard about the reunion and that the two announced shows were in London and New Jersey, I was overwhelmed with emotion. My first thought was "Somehow, this is Joe." I mean, we LIVE in New Jersey for goodness sake. And, London was special to us as we had spent time there together and (naturally) took in a show by The Gutter Twins while we were there - July 19, 2009 at Royal Festival Hall. And here I was two and a half years later with my world completely changed, hearing a tidal wave of an announcement supplemented by a gentle and happy flashback to London. Somehow music is life and a simple announcement of a reunion show connected me naturally back to that time, back to that place, back to that point in our love story.

Here's a glimpse into my Twitter feed from the day of the announcement, including the tweet about what I understood to be Joe's first request when he hit the "flip side"... 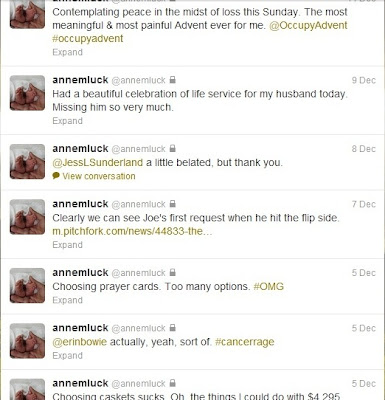 This past Wednesday, I was finally able to witness this much-anticipated reunion at a kick-ass, fan fantasy, better-than-ever Afghan Whigs show at The Bowery Ballroom. It was our favorite band at our favorite venue and I couldn't be more thankful that my new friend Elissa had a whole pack of tissues for those "moments" when music and life became so completely intertwined that it was impossible to separate the joy from the sadness, the ecstasy from the pain, or the present from the past. I've written in other posts about the role The Afghan Whigs (and later The Twilight Singers and the Gutter Twins and everything Greg Dulli) played in my relationship with Joe. This moment, this concert, was the culmination of our unique love story. 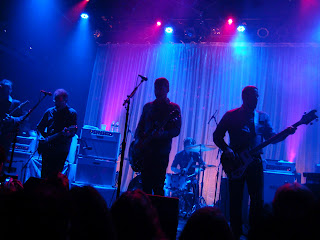 It was the story of a quiet, shy, guitar-playing Afghan Whigs fan who loved music that didn't seem to fit his personality and an outgoing, yet naive college freshman who had never heard anything like "that music" before. The music connected us and always seemed to be the way we could "read" each other over the years. The first time Joe and I spoke after I had gone through a painful separation from my first husband, our immediate re-connection was over the music of Greg Dulli. I knew that ours was that once-in-a-lifetime kind of relationship when, after we hung up from that first conversation, he called me right back because he had forgotten to tell me the most important thing that had happened for him in the time while we weren't speaking. He had met Greg Dulli. Greg fu#@ing Dulli. He sounded like a kid in a candy store as he told me every last detail. I was so excited for him...and sad that I had missed such a big moment with him.

In a wonderfully delicious twist to our story, I had my own chance to meet Greg on Wednesday night (along with John & Rick to boot). I guess it's only fitting that I had my "Greg" experience without Joe there since life had dictated he went solo on that one too. I just wish I had a chance to share every detail with him the way he did with me. It's just not the same putting a lonely post about the show on his old Facebook page. I guess this was just one of those many "firsts" that are difficult when you've lost someone and it's what we should expect when we live deeply enough to have our hearts broken. I'm thankful for a deep life with Joe that was rooted in deep music and glad that I have a photo to remember my encounter with a rock god (seriously, people, that is NOT an exaggeration).
Looking back I realize that at times our life together revolved around the music and at others the music revolved around our life together. We looked at dozens of houses as we searched for our first place together and we knew we had found "the one" when we pulled up on a house with a Front Street address. When it came time to choose a name for our son, we were several months in to Joe's cancer diagnosis and were looking for a meaningful name, knowing that we would use Joseph as a middle name. Domani came to Joe naturally both for its meaning ("tomorrow") and for its connection to Dulli's music. There are so many other moments where this amazing music and our lives intersected and for that I am grateful.

So on Wednesday night, as Crime Scene Part One came over me I knew that he was there in spirit and I knew that he could probably not contain his excitement over this perfect choice for an opening song any more than I could. And when the songs from 1965 started to come up in the set, I felt him with increasing intensity. These were ones we heard in person on the tour in 1999. And many times after on our own CD players and iPhones and USB drives. These were the songs that Joe used to first introduce me to The Afghan Whigs.  Uptown Again. 66. Crazy. By the time it got to Crazy, I was really feeling emotional. "Crazy about ya, crazy without ya, Crazy, Over you" - um, yeah. I don't fully understand it, but as I looked at Greg and John and Rick and listened to that amazing angsty song and then looked up to the mirror ball and the vivid lighting that was overtaking the place, I felt Joe. He was there with me and the realization made the tears flow. It was cathartic and I am thankful for that moment. By the time the last song from 1965 rolled around (it was Somethin' Hot, part of the first encore set), I was just happy to be present in the music that defined so much of my early adulthood and in the intense love of my guitar-playing Afghan Whigs fan who came with it.

Other people have done a much better job writing about the songs and the lighting and Greg's reefer hit and his dress down of the idiot who called him an asshole from the crowd. I will leave you to read their blogs and articles if you want to know the nitty gritty of what happened inside The Bowery Ballroom on Wednesday night. There were even other highlights for me that I didn't include here (like the way my whole body was passionately on fire during their take on "See and Don't See" or the pure ecstasy of singing the words to my favorite Whigs songs with so many other fans). I think though that it was important for me to keep this post about what happened inside of me while I was there and I hope it allows you to connect in a new way with the music I love and the man who loved that I loved it with him.

I'll end with my "report" to Joe on the night, the post I put on his Facebook page at 2:09am, just before I made my way back home:

"They opened with Crime Scene Part One. I felt you overpowering me during Crazy. They did Gentleman. An amazing show at our favorite venue. Oh, and I met John, Rick, and Greg. I'm as close to being in the beyond with you as I can get while still breathing."
Posted by Anne D at 12:27 AM