I am finding it quite difficult to put this past week into words. I've been literally working on this blog post since last Tuesday. There's just been so much emotion. Fear. Sadness. Anxiety. Helplessness. Anger. Frustration. Thanksgiving. Relief. Pride. Hope. Grief. Lots and lots of grief.

And there was also sleeplessness. And physical pain. And eventually, even laughter. After 4 days of tension and fear and anxiety, on Wednesday, October 31st I finally laughed and laughed and laughed. Thank God for my son who decided to be a ghost for Halloween by throwing his blankie over his head and saying "BOO!". And thank God for Jon Stewart ("I guess he found that f*@king light switch, huh?"). Seriously. I needed those laughs like some really needy thing needs whatever it really needs.

On Sunday morning before the Hurricane, I drove home from a good friend's wedding in North Jersey with a mental list of things to do running through my brain like the Times Square Stock Ticker. It included, stopping for gas, putting away all the items in my backyard, picking up some extra flashlights, and then finally picking up my little man and watching the Giants play the Cowboys. The stock ticker in my brain was overwhelming because it was also clouded by a million other things I HAD to do - fill the bathtub with water, set up the pack n play in the basement, fill pitchers with drinking water, turn up the heat, put little bags of water in my freezer, run the dishwasher, pay my bills, stock up on ready to eat food, and on and on and on - but mostly it was overwhelming because I didn't have Joe there with me. I did get to some of those things, but not all of them and thankfully, we still survived.

Domani and I spent Sunday afternoon, all day Monday and most of the day Tuesday in our house, witnesses to Hurricane Sandy. Our power started going off and on for short periods starting at about 6pm Monday.  For my little man, the loss of electricity was the worst part of the storm. He of course had no concept of the possibility that one (or more) of the 3 huge trees in our front yard could have fallen on our house. Or of the possible danger that comes with downed power lines. Or shattered windows. Or cars being swept up and dumped on top of us (ok, that last one was more from the imagination/movie category). In fact, until the lights started flickering, he was having a GRAND time.

The first time our lights flickered I thought that the little guy would NEVER STOP CRYING. My little tech kid. Thankfully, the first time it happened he was nearby me and I had a flashlight handy. The power came right back on and he quickly forgot the horror of being without power. He became brave again, wandering all over the house even though I tried to keep him close. The power flickered at least 3 more times before it finally went out for good. And I mean really for good. It would be nine days until we got it back - on Election Night the lights would shine again in my house. (Metaphorical if you ask me.) Once the power was officially out (a little before 8:00pm) it was time to make our way into the basement. Our little family of 3 had slept there during Irene too, unable to relax in our bedrooms with the winds howling outside. There was no way that my son and I were spending Sandy anywhere else but in the basement.

Being the supermom that I am, I proceeded to bribe my anxious, crying son with M&Ms and a flashlight so I could have some time to pack whatever perishables I could into cooler bags. I made sure I had one that fit the bottle of white wine that I had been drinking. Hurricane priorities. (Please note that my son was safely eating M&Ms by that point.) Once I had packed up whatever I could we read his Elmo book on the iPad about 4 times, cuddled, turned on the sleepy time play list, and let nature take its course.

Unable to sleep, I began reading R.A. Dickey's book Wherever I Wind Up and listened to all of the horrible noises outside which, of course, would have been much more horrible had I been upstairs. I poked my head upstairs one last time before I allowed myself to fall asleep. Even though I had heard some pretty loud crashes, I couldn't see anything from my kitchen windows that seemed amiss so I went back to the basement and fell asleep. The morning revealed some real damage although miraculously nothing on my property. I found out in conversations with neighbors later that EVERYONE was nervous about the possibility of my trees coming down. Certainly none more nervous than I.


Once it was clear that the power was not coming back on anytime soon, I made the decision that I would pack an overnight bag and my son and I would head over to my parents house and the promised land of power and heat. We left Tuesday late afternoon and the 9 mile drive took us over an hour. At least I had filled my gas tank on Sunday. I know that I cried at least twice during the ride, overwhelmed by the destruction I was only beginning to hear about and missing my husband more than I could ever express. The huge weight of responsibility for my son and for my household was just too much to carry without a release. I'm sure I cried again when I got to my parents' house and walked in to the warmth and light with Domani, although much of the time we spent there is a blur.

Domani certainly had a good time being at Grandmom and Grandpop's house.

On Saturday, my mother went with me to my house and we proceeded to throw out all of the unsalvageable items from my refrigerator and freezer. I felt sad. At the moment when we pulled out those chocolate bears with "Anne" and "Joe" written on them from last year's Thanksgiving dinner, I felt like I would just crumple to the floor in a heap. It wasn't from surprise. In fact, I had warned my mom that when she came across them, they were to be kept no matter what. But then she found them. And it felt like I had been punched in the gut. Oh, Sandy. How you stir up pain that I didn't realize was still there. We kept the chocolate bears. They remind me of the scene from True Blood where Sookie eats the last pie that her Grandma had made before she died. I feel like I will eat them on Thanksgiving in a private moment of remembering and grieving. Or maybe I won't. It's funny how a Hurricane can stir up more than just uprooted trees and floodwaters.

One of the best parts of the Hurricane for me was the time I was able to spend with my parents and Grandfather. I was there with them when we got the news that my Grandfather's sister had passed away after 94 full and wonderful years. There were many moments of watching my little guy play with his grandparents and his great-grandpa. And there was Scrabble. Confession: it's hard for me to play Scrabble now. It was a "Joe" game. In him I had found my Scrabble equal and it was always great playing with him (although I NEVER particularly liked losing to him). When we would play with my family, Joe and I would often be on a team and more times than not we were unstoppable. I miss that. With each word on a Scrabble board, I miss that. On Saturday night, I think I had some help from Joe. I beat my mom and dad pretty handily, which does not usually happen.

I'm glad we played Scrabble. It was a well-timed distraction from the storm aftermath and connected me with Joe at a time when I needed that encouragement.

And then on Sunday, I ran. To the cemetery. It was a good run. I felt powerful. I felt in touch with myself emotionally and spiritually. It was everything that I have found running to be since I started doing it again after a 15 year hiatus. When I arrived at the cemetery right around the 3.5 mile mark I was already feeling heavy with my loss. I cried on that lonely bench in the mausoleum for a good ten minutes, allowing myself to feel whatever I was going to feel. Anger. Sadness. Jealousy. Loneliness. Fear. Why did I have to go through this scary storm without my Joe? What if I end up going through every one of my life's storms alone - single supermom extraordinaire who really would rather not have to be so super? Why my Joe? There was no voice from Heaven answering my painful questions.

But there was this when I was leaving the mausoleum:

It didn't make me miss Joe any less and it didn't assure me that maybe there is someone out there to help share the "super", but it did bring some hope to my soul. And it gave me the physical strength I needed to run the 3 miles to Tastee Sub to pick up my lunch. Thankfully, they had power.

And, on Tuesday night, so did I. 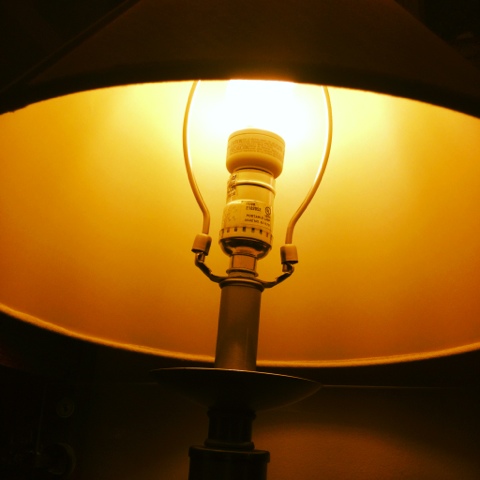