Soarin' at Epcot - Carry on and Live Well

Tonight, on our last night of vacation, I had one of those "Joe" moments again. It was unexpected and I'm thankful to Joe's cousin Tony for making it happen. As these things often go he had no idea ahead of time what was coming. He just knew that Soarin' was an awesome ride and wanted to give me the chance to experience it.

So, after the two of us drank our way around the "world" at Epcot (which basically involved some tequila in Mexico and some beers in Germany), Tony took the little guy so I could be among the last wave of enthusiasts to enjoy the popular ride called Soarin' in The Land pavilion at the park. (Hot Park Tip: Even though Epcot closed at 9pm tonight, the Soarin' ride was open until 10pm so the line that would normally be an hour or more was literally 5 minutes when I went at 9:25pm!)

I found myself in line next to a family with a boy who seemed to be about 7 years old. He was going on Soarin' for the second time today and, if not for his size, could have passed for a Disney employee himself based on his unbridled enthusiasm for the ride. He talked to me about it while we waited for our chance to soar above the trees, the ocean, the desert, the Disney fireworks, and so much more. When we sat down and buckled in he let me know that I could use the armrests because he would be keeping his hands up in the air during the ride (he had clearly discussed this with his dad who was sitting next to him - completely adorable). I told him that if he saw me gripping the armrests it probably meant that I was scared. He laughed and I appreciated that he was humoring the old lady.

Mid-way into the ride he turned his head to me and asked how I liked it (could this kid BE any more adorable?!) If it weren't so dark, he probably would have noticed the tears in my eyes. I'm glad he didn't because if he had I'm sure he would not have believed me when I told him that I loved it. The sensation of flying that this ride elicits was a powerful experience for me. In particular, during the segments when we were flying over the ocean, I felt Joe's presence in not only an emotional way, but also a physical way. That has only happened to me a few times since he died in December of last year, but when it does there is just no way I can hold back the tears. It's as if he is giving me a hug and and a shot of adrenaline all at once. The message I get is "carry on and live well".

Even now as I type this post it gives me chills. And tears. It was a perfect wrap up to this trip.

I feel like for the past 5 days I have been living very well. This Florida vacation has been a special time to have fun with the rockin' two year old who daily melts my heart and to build a sweet friendship with Joe's cousin Tony. We made lots of wonderful memories and the proof is my head to toe exhaustion. At least after having the chance to go Soarin' tonight, my heart is just a little lighter and my vision just a little clearer. 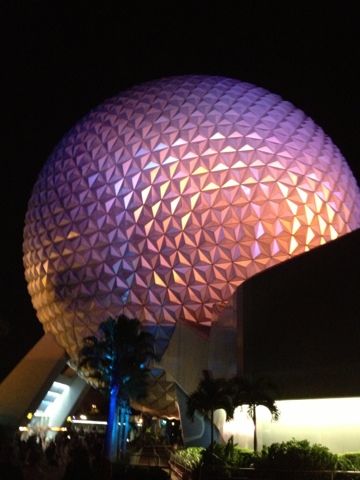