The Homecoming - The Afghan Whigs at Bogart's 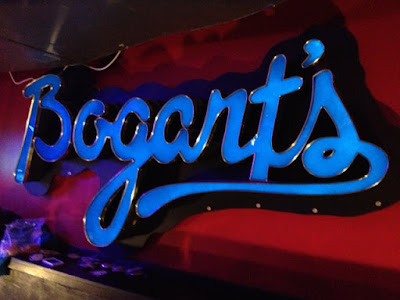 I have to admit that once it became clear the show at Bogart's was over on Thursday night, I was disappointed. As the house lights were turned up and the road crew started breaking down the set, I almost couldn't believe it. This was supposed to be an epic show. It was their HOMECOMING damn it. After 13 years, they were back at Bogart's. In Cincinnati. I kept replaying in my mind how I had imagined the show to be and it wasn't this. In reality, they had played the exact same set as they did in Carrboro, NC, although with a shorter encore. Maybe it was a combination of the truncated set and the letdown of knowing my flurry of AW concerts had come to an end, but I felt let down.

Thankfully, I was there with Erin who has this perfect way of cutting through crap to reality. They sounded great. The energy was great. It was a great show. So what if they played songs I had already heard live. So what if the set moved fast (quite possibly due to running up on a curfew). So what if there wasn't a lot of banter. So what if it was a shorter set. The band was tight and they were having fun at the hometown show. I was in the midst of enthusiastic fans who were singing and dancing right along with me. Erin jolted me back to reality and got me thinking about all the great parts of The Afghan Whigs in Cincinnati.

First was the deep connection to Joe that I experienced by being at that venue. It was so overpowering in fact that there were several times I just had to stop and "be" with him. When we arrived at the venue there was a long line outside even half an hour before the doors would open. As we walked along the sidewalk, I felt the tears pooling in my eyes and a lump growing slowly in my throat. Even though I knew how impossible it was, I fully expected to see Joe in that line just as I did 13 years ago on September 25, 1999. The feeling started to overwhelm me and just when I was sure I couldn't contain it, I heard a friendly voice say my name and saw a bunch of smiling faces. I love that I've been able to count on my Congo friends throughout this tour - whether it's a tissue or a stiff drink or a hug and a smile. The ladies who "saved" me at that moment won't even know what they did until they read this blog post. They are wonderful people and I'm thankful for them and our connection through the Whigs music. There were other moments once I was inside the club when I literally felt Joe there. I've become used to these moments over the past 10 months and I've learned to embrace them and roll with them and cherish them. They made the show at Bogart's very special.


It was also special to be there with Erin. She is a perfect concert companion and a strong support for me in my "Joe" moments. Over the past few years especially we've done a good job together just enjoying life and creating memory after memory. This was another one of those memory making moments and I'm thankful we experienced the show together.

And then there was the music itself. I have heard some complaints about sound at this show, but I have to say that from where we were the music sounded great. There were even some songs that I felt were the best live versions I had heard to date: Crime Scene, When We Two Parted, Into the Floor, Retarded, and Fountain & Fairfax were all excellent performances at this show. Greg was hitting all the vocals with gusto and it felt like the rest of the band had a special Cincinnati energy too. There was an emotional edge to this show for me (although nothing will come close to what I experienced at the Terminal 5 show) and I think that edge enabled me to really enjoy the music.

And then there was the encore and Greg Dulli's white shirt. Seriously, people, Greg Dulli had a costume change and ditched his traditional all black get up for a white shirt. Maybe you feel this petty, but I wasn't the only one who took note of it. Trust me that the Twitterverse and the world of Facebook were equally interested in the Savior of Misbehavior's changed look. It made for a fun (although short) encore and left me itching for that moment 66 days from now when I will ring in the New Year with Mr. Greg Dulli and The Afghan Whigs (& Scrawl!). Thankfully, rumor has it that we won't be stopped by a curfew that night!

For the setlist from this show, check out the list from NC up until the encore and then add Miles Iz Ded and Into the Floor.
Posted by Anne D at 1:52 AM