A Photo Shoot to Remember - November 2011

Just like the year before, we had planned with Joe's siblings to get together for some family pictures in early November so that we would have some good photos to use for Christmas cards and Christmas presents. Earlier this week I was reminded of that photo shoot as I was going through a box of cards and came across the one our photographer, Amy, had sent to Domani and me for Christmas. It featured prominently one of the photos she took of our family and the photo tugged at my heartstrings then just as it did when she sent it to me on Facebook right after Joe's passing and just as it did when I received the card initially in the mail just before the holidays. It was one of the last photos taken of the 3 of us as a family and even though there are certainly "better" pictures of the 3 of us, I will always cherish this one because it captured a special moment in our family's life. 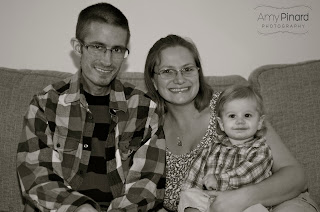 To me, this photo captured our ability to find a measure of happiness no matter what the situation and to just enjoy each other's company. Once you read about the full story of that day, I think you will agree that Amy's photo with all three of us smiling was nothing short of an expert catching our own miracle of love. I am amazed that by this point of the day, we were all still able to muster a smile at the same time.
The photo shoot was not easy for us that day.
We started out at Thompson Park in Monroe Township, not far from our home. But even so, Joe's health was in decline and he wasn't eating much due to the tumors that were wrecking havoc throughout his body. As a result, he was in more pain and much weaker than he had been even a couple of weeks before. And yet, even then he was my Superman. Joe walked out from the house to the car and rode over with us to Thompson Park, waiting for the moment when he would join us outside to take the photos.
As further proof of what a wonderful man we had in Joe, he agreed to go for the photo shoot WHILE his NY Giants were playing the New England Patriots for the first time since their historic match up in Superbowl XLII (when the Giants dashed the Patriots perfect season with a Superbowl win). He did, of course, wait in the car once we arrived at the park, listening to the game (and chatting with his mom), until we were ready for him to come out for pictures. As often happens, though, things weren't that simple. Amy had gotten lost trying to find the park and the sky was getting darker much faster than we had anticipated. It was time for our backup plan, so we returned to our house and took the rest of the photos there.
There must have been some divine intervention because there was no score in the Giants v. Patriots game for the entire first half. Joe was comfortably at home and in his La-Z-Boy recliner before any of the scoring happened and we were able to watch the exciting end of the game (the Giants won 24-20) without the distraction of photos to be taken.
Even at the house, however, it was not easy getting pictures with Joe. It was difficult for him to move around and we had to be careful of things like the tumor on his shoulder (of which I admittedly bumped once or twice during the course of posing for pictures). He was resilient though and hung in for the photos even while casting sideways glances at the football game on the TV.
One of the lovely things I clearly remember about that day, though, is how much our son wanted to be near his dad. Amy captured this lovely photo which still brings tears to my eyes - it's our little Domani grabbing onto Joe's leg. 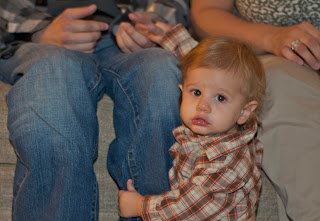 To me, it is priceless and tells the story of a precious Father/Son bond in a way that my words never could. The two of them were bound together in a powerful way and I think remain so to this day. I am so grateful to Amy for capturing these moments for our family. Less than a month from the date of our photo shoot with her, Joe passed away at home, just one room removed from our living room where these photos were taken. These, along with all the other photos Amy took of us during that shoot, are highly cherished now as some of the last photos of Father & Son and Family before he passed.
**Photos by Amy Pinard - http://amypinardphotography.com/
Posted by Anne D at 2:17 AM