My Superman - Warning, This is Permanent!

Yesterday I did something that I never thought I would do. Well, I thought about doing it when I was newly 18 and wandering around South Street in Philly with my friend Andrea, but never actually followed through. After contemplating it constantly since Joe passed, I decided it was time to do it.

Choosing what it would be was easy - he was my Superman and the tattoo would be a Superman logo. What was difficult was actually getting up the nerve to go. I am not the sort to frequent a tattoo parlor (it was a BIG deal when I got the second holes pierced in my ears) and I expected to feel wholly uncomfortable from the minute I walked in. So, once I decided I was definitely going to do it, my solution was to ask Joe's brother to come with me. He agreed, but I happened to arrive at the spot before him.

As soon as I approached the doorway, I felt the emotion well up. I started walking down the long hallway, then turned around and walked back out. I finished the Gatorade I had been drinking and worked up the courage to go in for real. Part of me wished that instead of a Gatorade it was a shot of something a tad bit stronger.

Once I went inside, though, I felt completely comfortable. Inside it was... well, cool. The staff were helpful and before I knew it I was planning out my tattoo with Evan (who, by the way, happened to be available to do it right then, lucky me). Thankfully, by that point Joe's brother had made it and he helped me make some final decisions about the tattoo. After completing a form (it's amazing how many different ways the paperwork reminds you this isn't going to wash off), we were off to get my first tattoo. 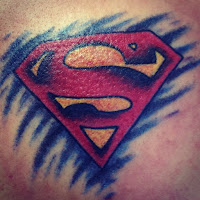 Anyone who tells you that getting a tattoo "doesn't hurt" was either under the influence of something at the time of tattooing or is lying.  It took a little over half an hour and it was pretty much the most painful thing I've experienced physically with the exception of childbirth. Add to that the emotional meaning behind my tattoo and it was a pretty intense experience. I was so glad that Joe's brother was able to be there with me while I got it, although I do think that if he told me one more time that it was "almost done" with another 5 minutes then passing by, I might have just come after him to do my own version of tattoo artistry. In the end though, I was really grateful he was there to support me and I am thrilled with the result.

Perhaps getting the tattoo opened me up a little bit more spiritually, because this afternoon while I napped I had the most wonderful dream. It was Joe and I living together in a place I did not recognize, but the feeling was a happy one, a complete one. The plot of the dream was news that Joe was being relocated for his job for one year to London. It was not totally imaginary - a few years ago he did spend several weeks in London for work - but it was exciting and warm and reminded me of so many wonderful things about our relationship. I woke up feeling a bit emotional and very close to Joe. It was special. I am thankful for moments like that dream which help me keep moving forward and remind me that I have not "lost" Joe.

I felt that even more powerfully when I came home tonight and found the following quote from Anne Lamott while I was doing a google search about her new book which is coming out on Tuesday.

"You will lose someone you can't live without, and your heart will be badly broken, and the bad news is that you never completely get over the loss of your beloved. But this is also the good news. They live forever in your broken heart that doesn't seal back up. And you come through. It's like having a broken leg that never heals perfectly, that still hurts when the weather gets cold, but you learn to dance with the limp." - Anne Lamott

I look forward to someday learning to "dance with the limp", but today I'm just glad that I will have a really cool tattoo to wear while I'm dancing.
Posted by Anne D at 12:09 AM