Train Like a Mother - Rocking My 1st Half Marathon

This time last year I was just starting to get my butt off the proverbial couch. It was a little over 3 months since my husband Joe had died from colon cancer and I decided that I needed an outlet for my sadness, anger, and frustration. Yoga had been my constant companion throughout my pregnancy (which coincided with Joe's diagnosis) and his illness, but running became my godsend during grief. After running seven 5k races in 2012, I decided to take on a bigger challenge for my birthday in 2013. So, on Saturday, March 9, 2013 through a stream of tears I crossed the finish line of my first half marathon with Lady GaGa's Edge of Glory pounding in my ears and the perfect sun of South Beach beaming down on my sweaty Mother Runner bod. It was an accomplishment that I suspect will make me well up for many years to come.

Cheering my finish in Miami Beach were my inspiring little guy Domani, my good friend Karen, Joe's cousin Tony, and Tony's friend Layla. What an amazing feeling to exit from the runners' area loaded down with post-race nourishment, medal clanging around my neck and pick up my little guy in a sweeping hug, only to have him stare right at my medal with a glimmer in his eye. Yep, HE ended up wearing it more than I did that day - and I'm ok with that.


Watching from many states away via the live tracking feature were my mom, Joe's mom and sister, and my friends Erin and Christon. They knew I had achieved my goal the minute I crossed the finish line and I was flooded with sweet tweets and text messages.

Awaiting the news on social media were countless friends and family members who had supported me through my 15 weeks of training including my cousins Suzanne and Bob who had run my very first 5k with me just last April. There were Mother Runners and Run Chatters, friends from work and friends from college, fellow Afghan Whigs fans and lifelong friends. There were union people and yoga people, support group people and church people. There were high school friends and brand new friends, country line dancing friends and every type of family member you can imagine. From every corner of my life, I felt so much love.

As I crossed the finish line, it was Lady Gaga's Edge of Glory (as recommended by Christon) that pushed me through, but along the way there were many other songs on my playlist that made this race incredibly special. About a week before the race I decided that I was going to ditch my usual "workout tunes" playlist and create a new one just for this half marathon. I posted my request for song suggestions on FB and Twitter and I made personal requests to some family and friends to give me their songs. I ended up with more songs than I needed for my 2:11:39 journey, but I have many special memories of particular moments before, during and after the race listening to the music that had been chosen for me.

I was driving south from my hotel towards the start line listening to Hearts on Fire (as recommended by Mauro). I remember the odd mix of clubbers calling it a night and runners making their way to the start line - all making for a very crowded pre-dawn South Beach. I also remember the sinking feeling I got when I arrived at the garage where I had planned to park only to see a "FULL" sign at the entrance. As I noticed the time (5:35am) I started to feel a slight panic rise because I was really not prepared with a Plan B (so VERY unlike me!) Thankfully, just a block away I found another parking garage and I made it to the start line with plenty of time to spare.


At the suggestion of a very wise runner friend I created my playlist with some slower songs up front to keep my pace steady in the beginning. It was a smart move and my easy tunes helped me keep a comfortable pace through the first few miles. I remember running past the Convention Center and then on a quiet street where we were treated to the spectacle of "Doctor Dribble", the guy who was running the race while dribbling not one, but two basketballs (This guy is really pretty incredible, not only because he finished faster than me while dribbling two basketballs, but also because he raised money to help foster kids while he did it...more on him including photos here.)

After my Doctor Dribble encounter, I discovered the joy of running with a pace group. I latched on to a 2:10 pace group for the next two miles and found that to be incredibly helpful. Once I came in to mile 4, the faster tunes started to pick up and once A Cut Above came on (a Mother Runner recommendation), I decided it was time to let loose. Then, I saw it rising in front of me. That dreaded elevation. Somewhere around mile 5, I was facing down the full wrath of the Julia Tuttle Causeway bridge and what comes through my earphones but Eye of the Tiger (recommended by John). I couldn't have planned it better if I were writing my own screenplay. I took it on like a champ and was rewarded with some Beastie Boys (as recommended by @helenabrit72), the halfway point, and a nice jaunt through downtown Miami.

Seven miles were down and I was starting to feel it in the blisters on my toes and some unwelcome chafing. The sun was getting intense. I went to put on my sunglasses only to realize they were covered in sweat. Immediately ahead was the mile 8 sign and another bridge. In my mind I had convinced myself that it would be perfectly fine to just walk up the hill (plenty of people were doing it). Then....I Don't Wanna Stop by Ozzy Osbourne (recommended by Justin...touche Justin). Followed by Kickstart My Heart (recommended by Melissa). Followed by Lonely Boy by The Black Keys (recommended by Susie). All of which combined for my fastest split on the course.

Fast forward to mile 11 and the transition from the Macarthur Causeway bridge to the South Point Park bay walk. The Biscayne Bay stretched out beautifully on my right and Sunshine of Our Love (recommended by Joe's Mom) played in my ears. It's a song that she carefully chose for its guitar and its lyrics, without even knowing that Joe and I had played it endlessly together on Guitar Hero. There was more than just sweat in my eyes as it all sank in - mile 11, missing Joe, the beauty of that moment, the many blessings of my life, the sunshine of OUR love which in some way will always be there no matter what lies ahead.

The final combo of Stronger (recommended by Kathleen), Titanium (recommended by Tarah), Paranoid (recommended by Scott) and, of course, Edge of Glory (recommended by Christon) provided just the burst of power that I needed for that last mile and a half and I still had plenty of awesome tunes left on my playlist to jam to on the car ride back to the hotel. I had fun running this half marathon and the best part was that my disciplined training allowed me to recover quickly and really enjoy the rest of our vacation in SoFl. 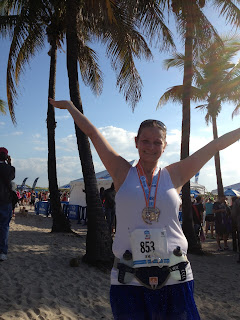 Getting to the finish of 13.1 has been a long journey with many cheerleaders and quiet heroes along the way. I couldn't possibly list them all here, but I do know that I owe a huge debt of gratitude to Sarah Bowen Shea and Dimity McDowell of www.anothermotherrunner.com for their Train Like a Mother Half Marathon Finish It plan and to all those who have watched my little guy while I have gone on my runs: my parents, Meredith, Liz, Aunt Nancy, Aunt Lorelei, Erin, Karen, Jen, Joe's Mom & Ross, Ken, and of course Karen C, Tony, and Layla who took care of him during the big 13.1! It's not easy for a single mom to train for a half marathon. During the height of my training, I was putting in 30 miles a week not including cross training sessions - that's a lot of child care time on top of the already hectic work schedule I maintain. The friends and family members who helped me are phenomenal and having a plan to follow put it all within reach. Perhaps though, I should wait a bit before I break the news to everyone that my goal for next year is a full marathon!

My Allstate Miami Beach 13.1 Playlist
(There were 16 more songs on the playlist that I didn't need because I finished!)
I Need You by Scrawl
One More Day by david m. bailey
Domani by Greg Dulli
Faded by The Afghan Whigs
Don't Stop Believin' by Journey
Seasons of Love from Rent
Feathers by The Twilight Singers
Everlasting God by Jeremy Camp
I'm a Believer by The Monkees
Dream On by Aerosmith
Call Me Maybe by Carly Rae Jepsen
A Cut Above by Avery Watts
Black Betty by Ram Jam
Eye of the Tiger by Survivor
Fight for Your Right by The Beastie Boys
My World Is Empty Without You by The Afghan Whigs
Memory by Sugarcult
Got a Thing on My Mind by Sharon Jones and The Dap Kings
Holding Out For a Hero by The Glee Cast
Kick Drum Heart by The Avett Brothers
I Don't Wanna Stop by Ozzy Osbourne
Kickstart My Heart by Motley Crue
Lonely Boy by The Black Keys
Lose Yourself by Eminem
Rie y Llora by Celia Cruz
So Tight by Greg Dulli
Run Around by Blues Traveler
Raise Your Glass by Pink
Sunshine of Your Love by Santana (feat. Rob Thomas)
Stronger (What Doesn't Kill You) by Kelly Clarkson
Titanium by David Guetta & Sia
Paranoid by Black Sabbath
The Edge of Glory by Lady GaGa