A Little Florida Journey to Remember my Joe

It's 8 months today. The little guy and I are in Florida visiting friends, the same friends Joe and I visited 7 years ago this month for their son's 1st birthday. We never made it to Florida as a family, so it seemed fitting that today I would take Domani on a little journey to some of the spots that were special to his Dad and me.

I started out by pointing the GPS to 160 Royal Palm Way which was The Heart of Palm Beach Hotel. Emphasis on the WAS because when we pulled up I realized it was boarded up and what used to be the central courtyard (with pool) was dug up. I can't say I was terribly surprised since it wasn't what I would call a premier hotel but its location was perfect (a block from the beach) and that pool in the courtyard was really nice. We definitely got our money's worth out of that place. I didn't make Domani get out to look at the abandoned hotel, just snapped a couple of quick pics while he napped in the car next to me. I felt a twinge as I looked at what used to be the lobby door and then at the torn up earth where I remembered the pool to be. Once back in the car, the twinge turned to tears as I remembered our arrival at the hotel in our rental Sebring Convertible and how excited I was for this first vacation with Joe.
From there it was a very short ride up the block to the beach. I remembered very clearly two photos we took there standing on the sidewalk with the ocean in the background. One of the photos was of me by myself taken on the sidewalk in front of the beach on a very hot day and the other was from the one night we ventured down to the beach. We were there well after the 8pm closing time and got yelled at by a patrolling police officer to get off the beach. We did, but we also managed to snap a photo of us standing on the sidewalk before we walked back to the hotel. (I remember distinctly that we had used the timer on the camera so we could both be in the photo.) He later used the photo on the card he gave me for our 6 month anniversary. Today, I was overwhelmed approaching the beach and Domani was a little cranky at the heat so I just snapped a few photos of the ocean and of Domani and me in roughly the same spot where we had taken those photos 7 years ago. Being there made me miss Joe terribly.

Our last stop on the "Joe & Anne tour" was City Place, although there were a few places I made sure we stopped at while making our rounds there. There were a at couple of restaurants where we ate and the Improv Comedy Club where we saw a show, but most memorable were Wet Willie's, the Barnes & Noble and the balcony where we took a photo. I took another photo at the balcony, this time it was Domani and me in the hot summer sun.

We went to Wet Willie's that first time we came to Florida and spent a long time talking on the porch area outside the bar, indulging in their way too strong frozen drinks. It was that conversation that made me realize this was going to work because my normally quiet and self contained Joe shared some very personal things with me about his life in the years while we had fallen out of touch. I knew on that porch at Wet Willie's that our second chance would be better than any Cinderella story. 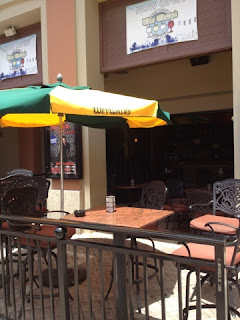 Before leaving City Place we stopped in at Panera because Domani was doing his little "Eat. Eat. Eat." show. After sharing a mango smoothie and some fruit we walked down to the Barnes & Noble. I remembered being there with Joe the last time we were in Florida. He had gotten me into watching True Blood on HBO and I bought the first books in the Sookie Stackhouse series to read while we were there. Today, the little guy and I checked out the kids books and ended up buying a new Dr. Seuss book (known as "Cat", "Hat" to Domani) and a book with a frog on the front (which requires a full on "Ribbit Ribbit" while crouched down impression from him every time he sees it). Leaving the store and walking back to the parking deck was hard.
Today was hard. It was hard to find hope in the midst of such beautiful memories now dashed. There were  moments today when I felt that this love I had with Joe was the once in a lifetime kind. He was an amazing guy and in a way I will never fully understand the yin to my yang. I realized today that while I'm growing and changing and moving forward and while I do encounter many glimmers of hope, there is still this uncertainly, this loneliness in the depth of my being. Perhaps I shouldn't be so surprised - the cliche of the two becoming one was nothing but true for us, in the most transformative way imaginable.