Take That Year End Montage And...

I admit it. I've been bitchy about that stupid Facebook "look at your year" photo montage that keeps coming up in my feed. Mostly it's because the default tagline is "It's been a great year! Thanks for being part of it."

The first time I saw it posted my thought process went something like this..no, it hasn't been a great f*#@ing year. In fact, it's been a pretty shitty year and 2014 can go die in a hole. Bring on 2015. No stupid FB video montage for me. Boycott. Boycott. Boycott.

Oh, I watched many of the ones my friends posted. I even smiled a couple of times. But there was no way I was going to even look at the dumb auto-generated crap it had waiting for me. Bound to be a montage of misery. A smorgasbord of sadness. A patchwork of pity. A...you get it.

Bit by bit over the past week though my attitude softened. After lamenting with a friend last Friday night about how ready we were to kick 2014 to the curb, I started to realize there were at least a few good things about this past year. I did see The Afghan Whigs 10 times and take some fun vacations with my little guy. It was an incredible year for me with my running. I've enjoyed some great times with my family.

Over lunch with co-workers Monday afternoon I started to parse it out a bit and realized that apart from the unpredictable roller coaster that was my love life and the constant disappointment of having fighting against unbridled corporate power in my job description, life wasn't so bad this year. And, even those parts had some notable highlights.

It's so easy when you are at a low point to forget about the great things.


Tonight as I got ready for bed, Facebook went into full aggressive mode and posted my year end montage without me even having to click to see it (only I can see it of course!) It was just too tempting. I prepared myself for the worst and started to flip through "my year".

It was so fabulous that I had tears in the corner of my eyes when I was done. And I was a little angry (because, you know, I was OBVIOUSLY manipulated by Facebook).

There was a beautiful Easter sunrise with my son. There was my amazing work trip to Brazil. There were many Mets games. And even some they won. There were fun nights out and early morning training runs. There was a new niece born on the 4th of July. There were so many races and the thrill of personal bests. There was a family vacation at the beach and a "mommy" weekend in Chicago. There was Halloween in Idaho with Naomi. There was the most amazing half marathon in Trenton. There was a BQ.

And it was all a part of the 2014 that this time last week I was so ready to send off to die in a hole. Maybe I'll just hang on to this year until Wednesday night. We can start new on Thursday - as planned. 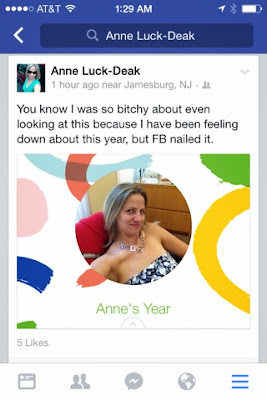