The Chapels of the Grand Tetons

Today I re-visited the Chapel of the Transfiguration in the Grand Tetons. From New Jersey.

I am thankful for the once a month I am able to spend in spiritual direction because it allows me a real opportunity to focus on my faith journey and how it relates to the million things going on in my life at any given moment.

As I was enjoying my time in silence this morning, the images that kept coming to my mind were those from the two chapels we visited while in Grand Teton National Park last week. The first one we visited was called the Chapel of the Sacred Heart and the second was the Chapel of the Transfiguration.

The striking part of the Chapel of the Sacred Heart was the incredible stained glass window at the altar of the church. I felt like it was different from any other stained glass window I had seen before. The colors were rich and I felt full of passion looking at it. I could envision myself worshiping God in this space, away from the busy-ness of my life, with an overflowing heart. It was a special moment to be in that chapel with my sister, letting the spirituality soak in. 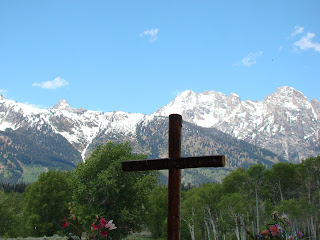 As beautiful as it was there, it was nothing compared to what awaited us at the Chapel of the Transfiguration. The altar of that church included a picture window which overlooked the Grand Tetons. There was a simple wooden cross on the altar along with two glasses filled with flowers. It was beautiful and when I saw it the tears came streaming down my face. I don't know if it was the simplicity and spirituality of the space or the fact that the Tetons were the place I had felt closest to Joe since he passed. Perhaps it was both. There was just something about the arrangement of that space and its framing of nature that touched my soul.

Both visits were memorable, but there was something about the Chapel of the Transfiguration which brought me incredible peace. Over the past week and a half I have returned there in my mind many times. Today, I am thankful for my spiritual director who helped me return there in mind, body, and spirit. I saw the sights. I smelled the scents. I breathed the air and felt the sun on my face. It was reinvigorating and I needed it. In re-visiting the chapel I felt like God has given me that experience and vision to strengthen me through these times when I feel alone and beaten down. I feel like at the Chapel of the Transfiguration, I received my own glimpse into the Transfiguration, a glimpse into heaven and beauty and the new thing God is doing here among us. May you find similar inspiration in these photos.