Father's Day with the Mets

I made the decision about what to do on Father's Day months ago and the honest truth is that I made it haphazardly without any thought at all. I selected Sunday, June 16 as one of the dates in my Mets ticket pack without even making the connection that it would be Father's Day, but as I look back on today I feel like there was definitely a case of divine intervention in my supposedly random ticket plan selection.

Up until last week I wasn't sure who was going to come with my little guy and me to the game since I assumed most people would be busy with other Father's Day plans. I was preparing myself for the possibility that it would just be the two of us. But sometimes life happens and both of my parents ended up being able to join us for the game. What a blessing that turned out to be! 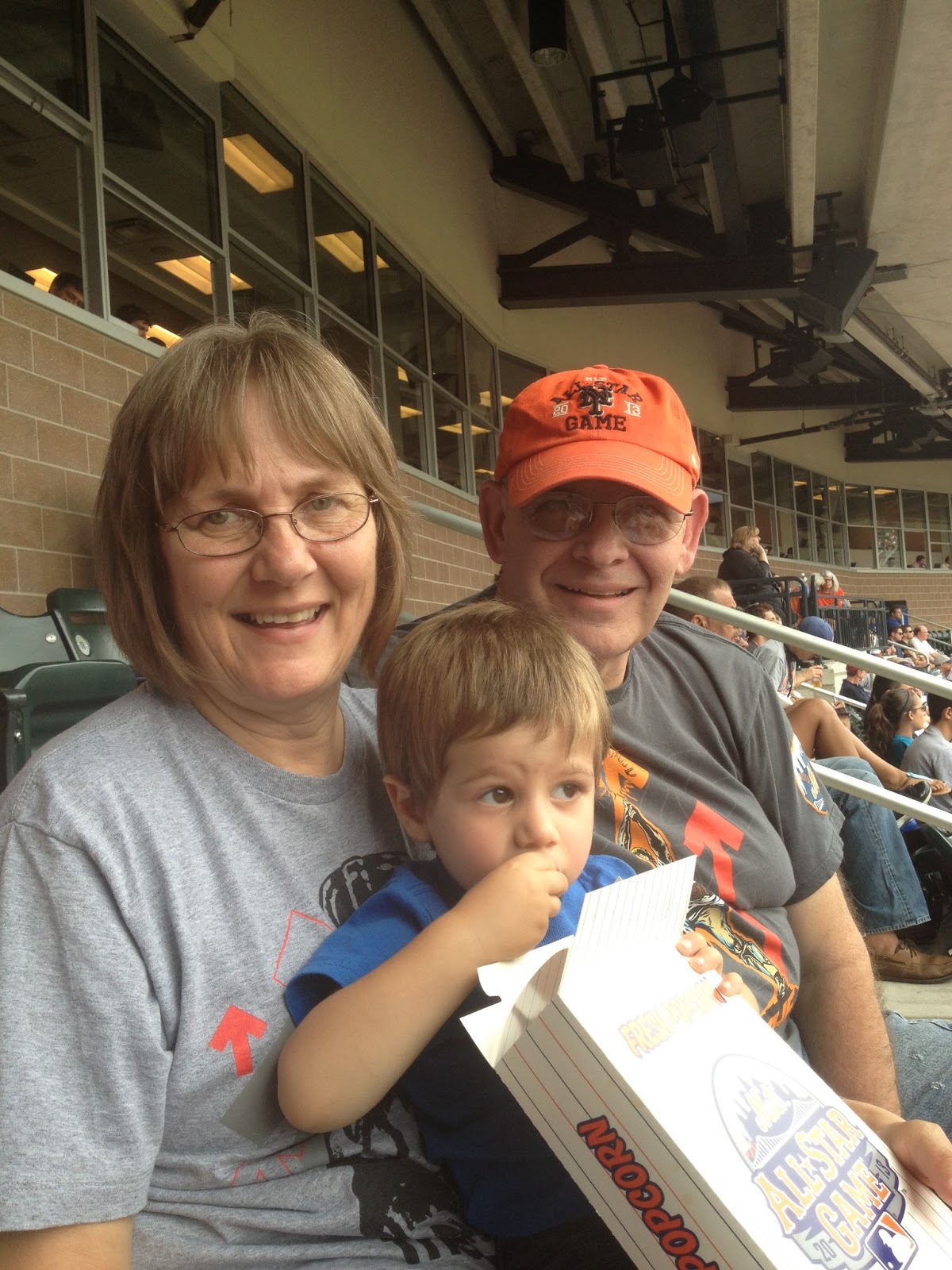 We cheered like good fans through 8 1/2 innings of uninspiring Mets baseball.  By the time we came to the bottom of the 9th I have to admit that I wasn't feeling like we had much of a chance. The Mets had only 2 wins so far in June. They had plenty of scoring opportunities already in today's game, but couldn't manage to put even a single run across the plate. And then there was the pitiful display of fielding in the 5th inning which has blooper reel written all over it. Nieuwenhuis, who came to bat with two on and  1 out in the bottom of the 9th, hadn't hit a major league homerun since June 23, 2012. He had just been called back up again from AAA. The causes for hope were slim.

Even so, it had been a nice day with my son and my parents. My Dad and I got excited when we saw my tweet which mentioned him up on the Citifield scoreboard. We had a blast watching my little popcorn machine make quick work of his giant box of popcorn. I was even bold enough to tell my Dad that the Mets never lose when I get something up on the big screen. (Surely that was destined to be a jinx!) It had been a fun day and I wanted to remember it. So just before the bottom of the 9th with the Mets down 0-3, I moved over to where my Dad was sitting and posed for this photo. 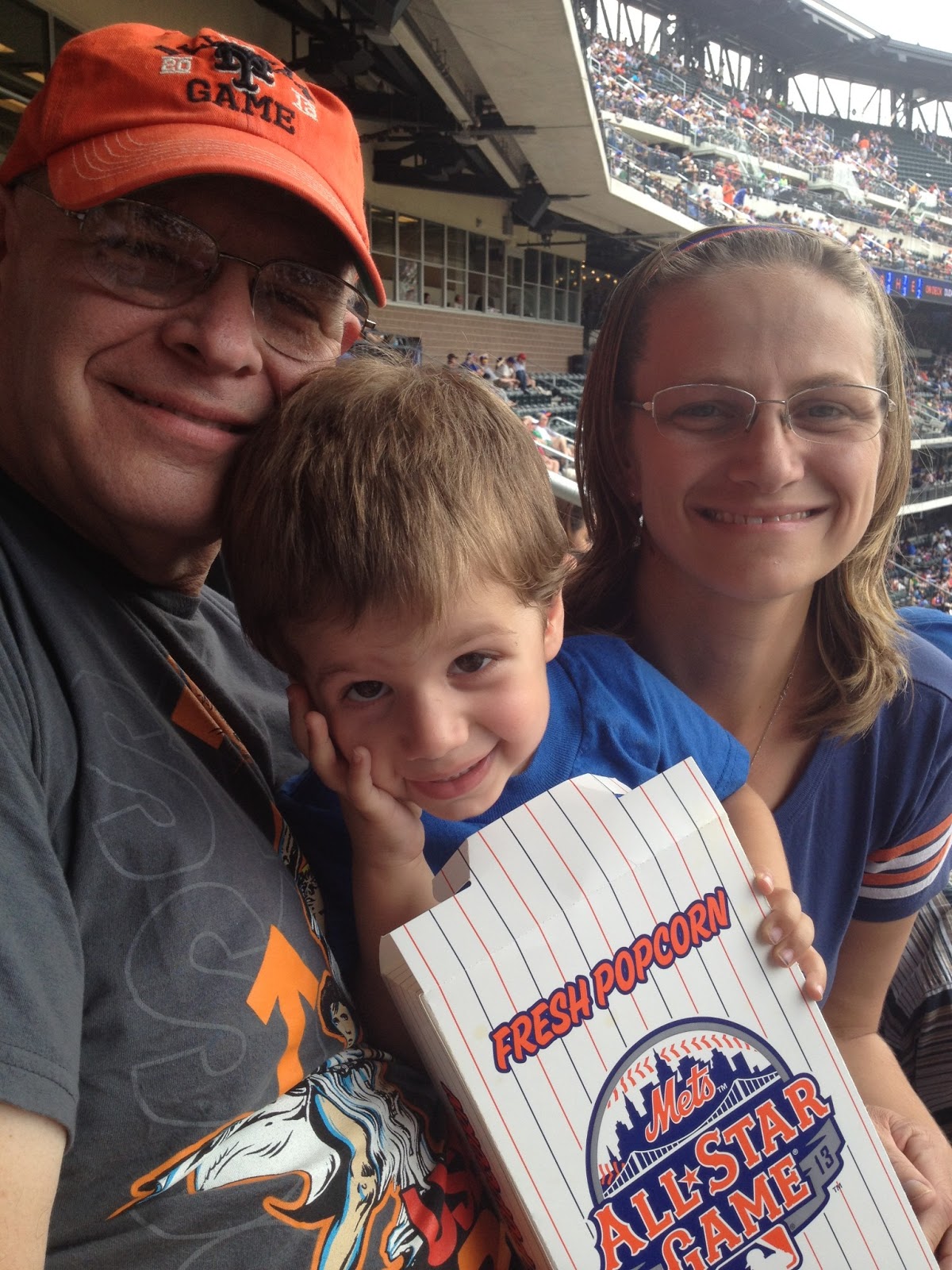 We were having a nice time together in spite of the Mets lackluster performance. And then Marlon Byrd led off the inning with a homerun. The apple went up. My son was on cloud nine. We all were having just a little bit more fun.

Duda walked. Buck came up with a hit. Quintanilla (whose name my son LOVES to say) advanced the runners on a bunt. All of a sudden they were looking like a real major league team. I almost felt bad for being a cranky Mets fan and changing the lyrics in Take Me Out to the Ballgame to "if they don't win, it's the Mets". I remember mouthing something to the effect of "Joe, there is no way this is going to happen, is there...just as Nieuwenhuis was stepping to the plate.

He took the first pitch for a ball and then wouldn't you know it, he cranked that second pitch firmly out to the Pepsi Porch. The familiar strains of Takin' Care of Business started filling the ballpark and tears just started streaming down my cheeks. I hope my parents don't mind my saying that they both got teary too. This was an emotional day not just because Joe wasn't there, but also because my mom just lost her Dad two weeks ago. This was a sweet and hopeful ending to a day that came with a lot of sadness. (The little guy cried too, but that was because he was shocked at all the noise from the homerun. Once he realized it meant that the Mets won, he was fine.)

Those Mets who in the 5th inning couldn't even seem to manage a simple game of catch thrilled us all with a bottom of the 9th we could smile about all the way home. Or in my case, all the way to the cemetery because after that I definitely needed to have a "chat" with my little guy's Dad. As is the case these days when I go I didn't spend a long time there, but it was long enough to give his brother a few hugs, shed a few tears, and acknowledge how thankful I am for the lessons of hope he has always brought into my life - and that, somehow, even though he is no longer here with us physically, he still brings. 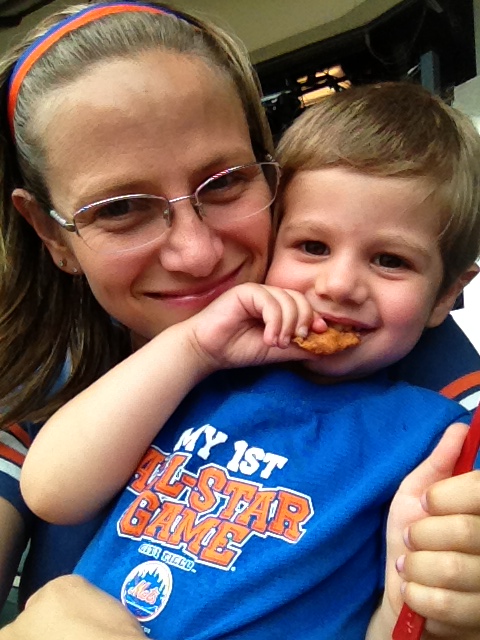