Tonight my sister Naomi and I teamed up to throw an Ugly Christmas Sweater Party to raise money for Stand Up to Cancer. The organization has been running a fun event throughout December where individuals could ask for sponsors and commit to wearing an ugly Christmas sweater every day or groups could hold a fundraising party with all the proceeds going to the fight against cancer. We decided that doing a party would be a fun way to get friends and family together while Naomi was back in NJ over the holidays and give cancer a swift kick in the pants at the same time. 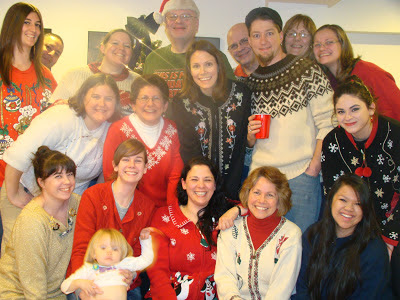 My house tonight was full of family, friends, food, and some pretty ugly sweaters. We got a little rowdy playing the quiz game Buzz and tried to channel our best "Joe" performances on Rock Band. We had all been touched by cancer in some way and together we pitched in over $250. Not too shabby for our small but mighty crew.

The hardest part of the night for me was playing Rock Band. This was the first time I've had it out since Joe died and it was strange playing it without him. His steady way of playing that guitar or banging out the rhythms on the drum just couldn't be matched. And, as my sister Karen reminded us all tonight, the amazing thing about Joe was that he was just as good whether he was drunk or sober! It was a sweet, but difficult reminder of our loss, but an appropriate setting for such a reminder.

After all, the whole point of our gathering is so that maybe someday families won't have this same pain of losing their loved ones to cancer. So, just as I have experienced at other points this year, I am sad, but also thankful for a way to "do something" with my grief. May the funds we raised go far in the fight against this disease that stole our Joe and too many others.

If you want, you can make a donation to our "party" through this link.
Posted by Anne D at 12:16 AM